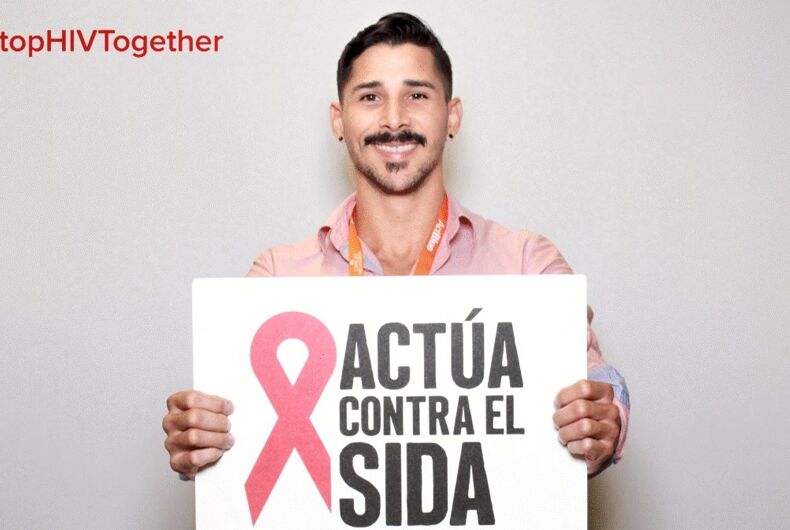 It was the brutal murder of Jorge Steven Lopez Mercado in November 2009 that made Damián Cabrera-Candelaria realize that he needed to join the movement for LGBTQ equality.

He grew up in a small town on Puerto Rico’s western side, a place where he says that, as in other places on the Island, it is difficult to escape machismo and traditional gender roles. It was on that same side of the Island where he started activism while attending undergraduate studies at the University of Puerto Rico-Mayaguez Campus.

“I had just come out of the closet. I had finally accepted who I truly am by liberating myself from the rigid and bigoted religious beliefs culture had instilled in me.”

Damián was not much older than the 19-year-old Mercado, who had been found on the side of the road, decapitated and burned. The tragic event galvanized his community and captured the attention and solidarity of LGBTQ people all over the world.

“I felt like it could’ve been me—murdered for just being who I am. The whole LGBTQ community didn’t feel safe anymore,” said Damián. “Everyone felt like we could be targeted next.”

Lopez Mercado’s murder ignited the spark for Damián’s activism, which is still at the foundation of his work today and fueled his efforts to organize his peers and establish a campus organization to support LGBTQ students.

“I needed to do something. If we didn’t take action, nobody else would,” he said. Damián says co-founding this group was one of the best moments of his life as an early organizer.

“One of the things I feel most grateful for is when people came to our organization, when they were feeling like they’ve been left behind or like nobody else is having experiences like theirs. Coming to our organization and seeing a bunch of queers doing unapologetic political work, you see how people start empowering themselves, their attitudes toward themselves start to change. That was one of the best experiences I ever had,” he said.

Since those early days of his activism as an undergraduate, Damián’s work for his community has taken root in public health, specifically for LGBTQ people. In 2015, he founded Puerto Rico’s LGBTQ Services Directory, which has received recognition for the directory’s effort to connect people with medical providers on the island who are sensitive to the needs of the LGBTQ community. What started as a medical directory has now expanded into housing services, legal services, and organizations doing political work throughout the island.

Indeed, Damián credits his work on LGBTQ health as integral to his perception of himself.

“I feel privileged to work with one of the few teams in Puerto Rico doing advocacy from a research perspective, to ensure we have enough documentation on our experiences,” said Damián. “One of the barriers we see specifically in the Trump era, is that there is a lack of data gathering efforts on the experiences of LGBTQ people throughout the United States and in Puerto Rico.”

This past summer, however, Damián found himself and thousands of his fellow Puerto Ricans taking to the streets to renounce their government and its corruption that was affecting all communities on the island. Damián got very involved in the #RickyRenuncia movement and said that seeing several of his LGBTQ brothers and sisters leading so many of the rallies and marches filled him with immense hope for the future of the island.

“For the first time, I saw a united Puerto Rico that was standing up against injustice and corruption. Every time I went to a rally and protest, it thrilled me to see trans and rainbow flags [in addition] to mine. LGBTQ people were leading these rallies. Our community was deeply involved in the movement,” he said.

Damián encountered some pushback from a few people who wondered why, for example, a drag queen had to lead one of the many protests that took place this summer.

“When we were asked why LGBTQ people were leading the rallies, I always pushed back by saying, ‘why not?!’” he said.  “We are impacted even more by corruption. We are impacted even more by la ‘La Junta de Control Fiscal’ [the colloquial name for the Financial Oversight Management Board, overseeing Puerto Rico’s debt repayment], the colonialism that is impacting us. So, we have to be here. The LGBTQ community’s leadership was an amazing and critical aspect of the #RickyRenuncia movement.”

While he spoke fondly of the amazing victory he and his fellow Puerto Ricans enjoyed, he recognizes that there are battles yet to be waged.

“Even though he resigned, corruption in Puerto Rico persists. Government officials involved in the scandal are still in positions of power,” said Damián. “I hope that we as a country finally recognize our collective power when we come together, and I hope it sent a solid message to politicians that they work for us. We have the control to take out anyone that is not working towards the well-being of Puerto Rico.”

Getting closer to the community and making ourselves more visible is what Damián says making a difference looks like to him in these trying times for the LGBTQ and Latinx communities.

“One thing the [Trump] administration has tried to do, but hasn’t accomplished, is to erase our stories. To make us invisible, and we are not going to let that happen,” he said. “We as a community have been organizing for years and despite the limited resources we have seen significant progress.”

He says doing this work to increase visibility, especially in his beloved Puerto Rico, is exactly what they should be doing to fight back against the constant attacks his two communities have especially endured since June 2015.

Growing up in a small town and attending a Catholic school for nine years, Damián says he struggled mightily with accepting his sexual orientation, and sought help from the very religion he now blames for so many of those guilty feelings he had.

“It might sound ridiculous, but I prayed every night to the Virgin Mary and promised her I wasn’t going to have those feelings anymore, that I was going to hide them.”

But by the time he turned 18, he had accepted who he was and that there was nothing wrong with it. Feeling more mature and ready to come out, he sat down to write a letter to his mom explaining his truth. He opted for a letter, he says, because he knew his mom would tell his dad, something he did not want to endure. The initial reaction involved much crying on his mom’s part and disappointment on his dad’s. It took them a few years to become the allies he says they are today.

“Seeing me work so hard and being so unapologetic about it,  they came to understand that I wasn’t going to change,” said Damián.

These days, his parents are politically minded folks who often call him when they feel like they’ve witnessed injustice in their local community.

“Even though it was a hard moment at first, things have changed,” he said. “I also see it as a reflection of where we are as a community. It wasn’t just me changing, it was the whole landscape, the whole public discourse that we and past generations helped to change that also made people around me see me differently.”

“If you have an idea on how you can help the community, do it,” said Damián.  “Organize. Help the people around you. Search and fight for resources. Despite the growing support for LGBTQ equality, we still have to fight for the right to exist all across the world.”

He also has a special message for his Latinx friends on the mainland under threat by ICE: know that persecution cannot bring us down. It will make us stronger.

“We all have to keep up the fight and work towards a better Puerto Rico, and a better state for queer Latinx people everywhere.”

The Supreme Court showed its liberal/conservative split in LGBTQ cases. Here’s how it went.