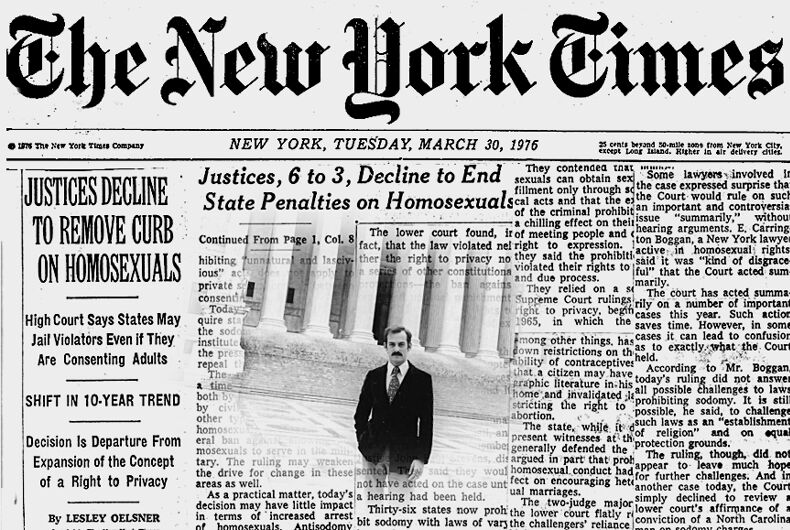 “I am deeply disturbed and depressed by the Supreme Court’s insensitivity to the right to privacy of all Americans.” – “John Doe” 1976

As the Supreme Court considers three LGBTQ rights cases this term, we are reminded of the first test case against sodomy laws, and efforts in 1976 related to it to amend the Civil Rights Act of 1964.

In an historic 1964 speech to the Mattachine Society of New York, “Civil Liberties: Progress Report,” Frank Kameny, cofounder of the independent Mattachine Society of Washington DC, said: “[W]ith due regard to strategy and tactics, we must take a bold, strong, uncompromising initiative in working for these rights; that the established framework of authority, constituted and otherwise, must be challenged directly by every lawful means at hand.”

One of those, he proposed, was launching cases challenging antigay laws. But it wasn’t until a decade later, after some seemingly encouraging privacy protection rulings such as Roe v. Wade, that the time seemed right for the movement to attack sodomy laws in court.

While private consensual acts were rarely prosecuted because they rarely came to the attention of police, acts in quasi-public places such as movie theaters more often were. And by defining gays as an ipso facto “criminal class” such laws were often used to justify every other kind of antigay oppression and discrimination, particularly in the workplace.

This notice appeared on the front page of the November 1973 edition of The Gay Blade, precursor of the Washington Blade. 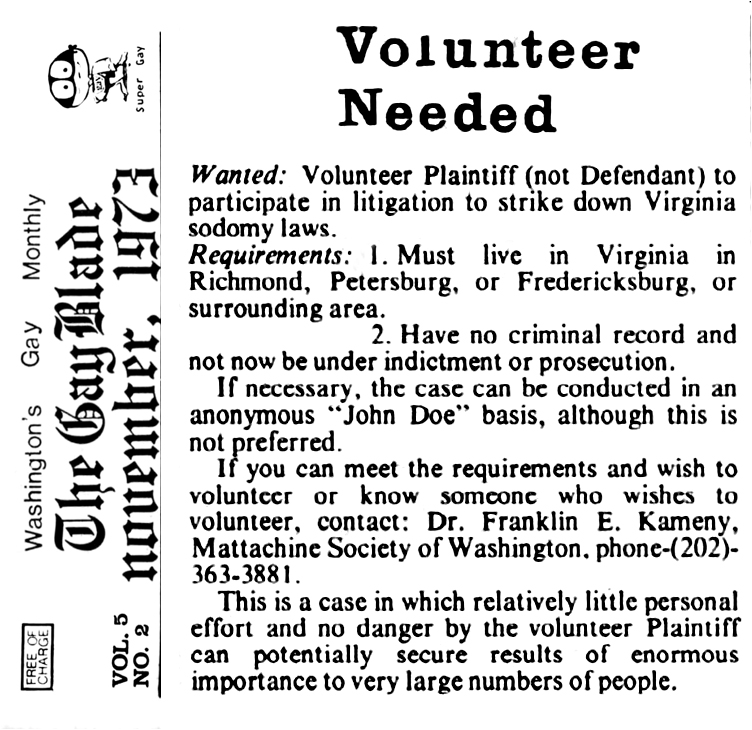 Contrary to the official story at the time, no one responded to the ad; at least no one planning the case believed was suitable including Kameny, Bruce Voeller, Executive Director of the National Gay Task Force (NGTF), the Virginia Civil Liberties Union, and Alexandria, Virginia, attorneys Philip Hirschkop and John Grad.

Hirschkop had been the lead attorney for plaintiffs Mildred and Richard Loving in the case Loving v. Virginia in which the Supreme Court ruled laws banning interracial marriage were unconstitutional.

So it was decided that Voeller’s lover, 27 year old Navy veteran Bill Bland, would become one of two anonymous plaintiffs, “John Doe, a resident of Richmond, Virginia, in continuing fear of prosecution,” and “Richard Roe, a native of West Point, Virginia, now living in New York City” whose parents “discouraged” him “from returning to his home in Virginia with his homosexual lover because of fear of criminal prosecution.”

The Court was told they were “active homosexuals who regularly seek and enjoy sexual gratification in a private and consensual manner with other [male] adults.”

The penalty in Virginia at the time was one to three years in prison.

Arguments were made that Constitutional guarantees of freedom of expression, due process, and against cruel and unusual punishment should apply to homosexuals, too.

Joyce Murdoch and Deb Price, authors of Courting Justice: Gay Men and Lesbians v. the Supreme Court, wrote in 2001 that Kameny, amazingly, told them there was no “Richard Roe” (though the names must have gotten confused because Bland was from West Point, lived in New York City, etc.).

While there was no reference to the case, a photo of him and Voeller was among those in TIME magazine’s major September 1975 article on the state of the gay rights movement called, “The Gay Drive for Acceptance.” Because of Voeller’s NGTF position, the couple had been asked to be on the cover but with the importance of the unprecedented challenge to the military’s ban on gays by Air Force TSgt Leonard Matlovich, Voeller suggested the magazine feature him instead.

Through Leonard, I met them both in New York in November 1975 but wasn’t told of Bill’s then-secret mission.

“If a State determines that punishment [for sodomy] therefore, even when committed in the home, is appropriate in the promotion of morality and decency, it is not for the courts to say that the State is not free to do so.” – Albert V. Bryan, U.S. Senior Circuit Judge. October 1975.

According to Murdoch and Price, Justices William Brennan, John Stevens, and Thurgood Marshall had wanted to hear oral arguments. Five of the six justices who out voted them had been appointed by Republican presidents.

According to Bob Woodward in The Brethren, Marshall, the Court’s first African-American justice, “was outraged. [He] found it ridiculous that the state should exercise such police power. [T]he majority’s unwillingness to face the issue squarely – to accept the case for argument and to write an opinion spelling out its reasoning [was] cowardly.”

Condemnatory articles or editorials appeared in The New York Times, The Washington Post, the Chicago Sun-Times, The Philadelphia Inquirer, The Boston Globe, the Los Angeles Times, et al., and this cartoon in the Louisville Courier-Journal. 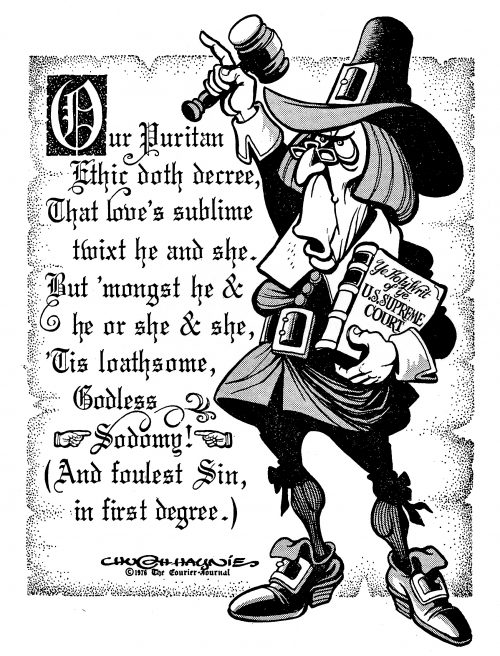 In the same poll, 63%  thought that “homosexuals should be accepted in society and treated the same as anyone else.”

In May 1976, New York Representative Ed Koch quoted the poll in the Congressional Record in an effort to convince his colleagues to support H.R. 166 which would amend the Civil Rights Act of 1964.

The amendment would have prohibited “discrimination based upon such affectional or sexual preference in the following areas: (1) public accommodations; (2) public education; (3) equal employment opportunities; (4) the sale, rental and financing of housing; and (5) education programs which receive Federal financial assistance.”

Ironically, the ruling’s first negative consequence was on another Kameny-conceived case; wiping away the constitutional protection argument planned by Leonard’s attorney.

It worked against other gay plaintiffs over the years, too. In civilian employment discrimination challenges, at least one other military case, and Michael Hardwick’s challenge to Georgia’s sodomy law which 10 years after their Doe affirmation resulted in their explicit 1986 ruling in Bowers v. Hardwick that bans on homosexual sodomy were constitutional.

Seventeen more years passed until that ruling was reversed by a differently constituted Supreme Court in 2003 in Lawrence v. Texas finally decriminalizing sodomy nationwide 29 years after Doe began. Of the major players, only Frank Kameny had lived to see the ultimate victory. Like Leonard, Bill, Bruce, and Michael Hardwick had all passed from complications related to AIDS.

The Supreme Court showed its liberal/conservative split in LGBTQ cases. Here’s how it went.