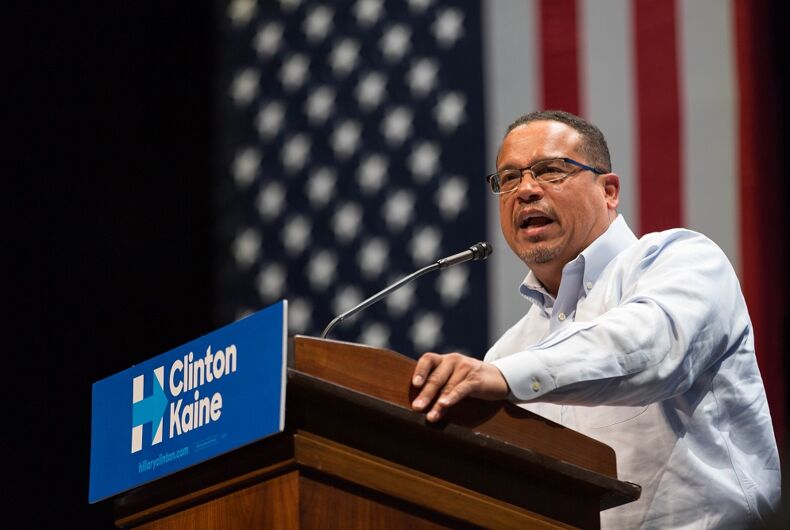 One of the country’s best-known Democrats is taking on a Christian business that sued for a religious exemption to an anti-discrimination law.

“Business owners’ free speech and beliefs are already fully protected under the First Amendment,” they wrote in a Star-Tribune column. “What they want is a license to discriminate against LGBTQ folks.”

The case is about Telescope Media Group, which is owned by straight couple Carl and Angel Larsen. The company doesn’t currently film weddings. The Larsens say they want to get into wedding filming, and they want to post on their website that they don’t accept same-sex couples as customers.

So they sued the state preemptively in 2016, arguing that their religious freedom was being violated by the state’s ban on discrimination on the basis of sexual orientation.

A federal judge dismissed their lawsuit, but last month they won an important appeal that is allowing their lawsuit to go forward. It was sent back to a district court for a trial.

Ellison and Lucero took several digs at the Larsens’ arguments, like the couple’s claim that their wedding videos will be artwork subject to First Amendment protections instead of just plain work: “Unlike any wedding videographer we’ve ever heard of, this company claims it will exercise complete creative control over wedding videos, so that any couple getting married will be essentially merely actors in the videographers’ short film.”

They also said that the law isn’t about beliefs. Instead, it’s about rules for businesses.

“The Minnesota Human Rights Act doesn’t tell people what they can believe,” Ellison and Lucero wrote. “No law can — that’s fully protected for every American under the First Amendment to the U.S. Constitution.”

Ellison and Lucero also stressed the bigger picture. Many cases about religious exemptions are started by conservatives and focus on things that can be written off as frivolous, like cakes.

But the law doesn’t make a distinction between frivolous things and important things, and winning a right to deny service for a film business could grant that right to other professionals.

“Imagine if a tax preparer refused to do your taxes because they disapprove of your marital status or think a woman shouldn’t work outside the home. Imagine if a convenience-store clerk wouldn’t let you pump gas because they don’t believe in a religious symbol you’re wearing or the color of your skin offends them. Imagine if your doctor or nurse denied you medical care — even in an emergency room — because of where you worship, what color your skin is, what gender you are or who you love, for example.”

The column says that the state has an interest in ensuring that open discrimination remains a thing of the past.

“No Minnesotan should be afraid that might happen to them. The Human Rights Act protects all of us from that.”