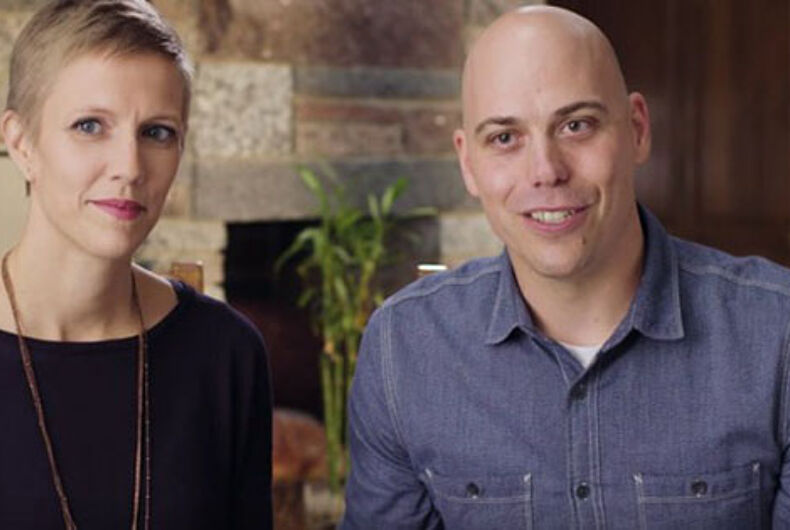 Of all the stories about far right conservative Christian business owners who sue in court for legal cover to discriminate against same-sex couples and their right to marry, this one takes the cake. Or shall we say, the videotape?

KTSP reports on Carl and Angel Larsen of St. Cloud, Minnesota: married, devout Christians, who own Telescope Media Group, a film company that seeks to “magnify Christ like a telescope.” And despite the fact the law in the United States of America is that every man and woman has to right to marry whoever they choose, they object to laws protecting that right, claiming it discriminates against their religious beliefs.

Laws like Minnesota’s human rights act, which they have targeted in a lawsuit against the state attorney general and the commissioner of human rights. The Larsens tell KTSP, they want to expand their film company by breaking into the lucrative wedding services industry, but want to offer their videos to heterosexual couples only. They told the station no LGBT couple has ever tried to hire them, and claim their lawsuit is a pre-emptive action.

Kevin Lindsey, the human rights commissioner named in their lawsuit, called it “part of a pattern of nationwide litigation that is now aimed at eroding the rights of LGBTQ Minnesotans.”

The Star Tribune reported the Larsens are suing because the human rights act would force them into producing videos “promoting a conception of marriage that directly contradicts their religious beliefs.” They argue that their right to expression is being “chilled and silenced” by the state, preventing them from advertising their straights-only wedding at wedding expos and on websites.

Of course, they aren’t doing this all on their own. They have the backing of a powerful right-wing conservative Christian group that fights for religious freedom around the world, the Alliance Defending Freedom. The Southern Poverty Law Center notes the ADF’s work is fanning the flames of antigay hatred globally in battles over transgender bathroom policies, marriage equality and contraception.

Below, watch the ADF’s video on behalf of the Larsens:

‘Hamilton’ fans targeted by serial pickpocket, but NYPD has its eyes on her