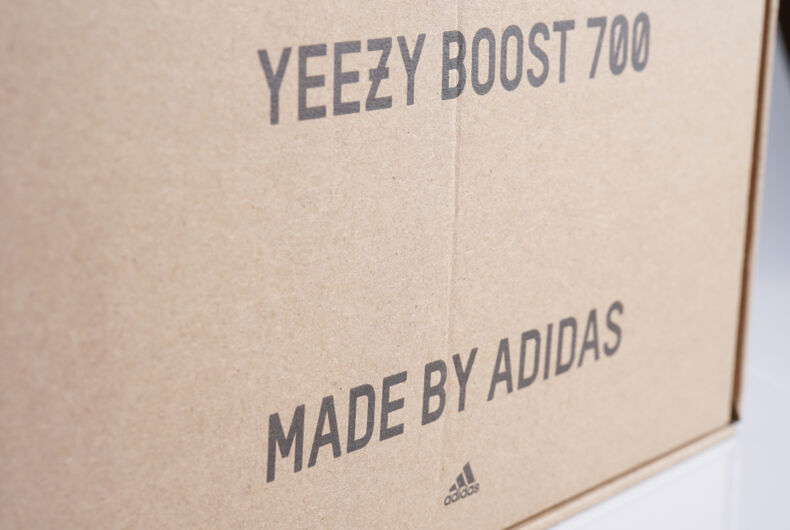 I love Adidas and Y’3’s streamed “health-goth” aesthetic. But in response to Kanye West’s new song, “Closed on Sundays,” that praises the homophobic fast-food chain Chick-fil-A, I’ve thrown away my entire Adidas and Y-3 collection. Why? I will not support a brand that supports a rapper that praises a homophobic corporation.

In a time when Christian adoption agencies are potentially refusing gay families, and PoC trans-women are regularly murdered in horrific numbers, West’s praise is deadly. While many already boycott Chick-fil-A, consumers need to understand that multiple brands are connected here – Kanye West, Yeezy, Adidas, and Chick-fil-A.

West’s income directly benefits from his Yeezy line with Adidas. According to USA Today, the rapper earns a “15% royalty on the wholesale price of his sneakers,” in addition to a marketing fee. By protesting Adidas, it sends an effective message that rejects attacks on LGBTQ rights; after all, an economic protest is a powerful and accessible method of activism.

According to Forbes, West’s Adidas Yeezy line generates approximately $3 billion in annual sales, while estimating his “upstart is expected to top $1.5 billion in 2019.” Footwear News reported that Adidas’s annual revenue was approximately $24 billion. The rapper’s shoe line is a huge boost for the German corporation. While West has a musical career, his fashion endeavors are arguably his most lucrative.

At one point, Kanye seemed to be an LGBTQ ally. In a 2015 interview with MTV News, the rapper boldly defended the community:

“Everybody in hip-hop discriminates against gay people. Matter of fact, the exact opposite word of’ hip-hop,’ I think, is’ gay.’ You play a record and if it’s wack, ‘That’s gay, dog!’ And I wanna just come on TV and just tell my rappers, just tell my friends, ‘Yo, stop it fam,’…If you see something and you don’t want to be that because there’s such a negative connotation toward it, you try to separate yourself from it so much.”

Everything changed when he began openly supporting Donald Trump and entered the President’s inner circle. “Closed on Sundays” and Chick-fil-A are both far cries from the supportive statement we heard previously.

Chick-fil-A has donated millions of dollars to anti-LGBTQ organizations. Asked if they would ever consider supporting queer-friendly endeavors, the executive director of the Chick-fil-A Foundation, Rodney Bullard told Business Insider, “Would it be authentic for us to partner with that organization? For them to partner with us? And for us to get work done? I think those are the things that we would definitely consider and be mindful of. Would we do it just for reasons that weren’t authentic? No, we wouldn’t do that.”

Adidas is now caught between standing behind the values they espouse and the bottom line. By allowing an influential figure like Kanye West to profit from their business, Adidas is wilfully ignoring his personal and political views.

In 2019, all industries intertwine with each other — fashion, entertainment, music, politics, and business. The notion of “opting-out” of the dialogue is willfully ignorant.

The relationship between Kanye West, Yeezy, Chick-fil-A, and Adidas is simple. Your Yeezy purchase goes towards Adidas’s annual revenue which pays Kanye West’s salary, and that enables him to lift up Chick-fil-A’s actions and ideology.

Considering that the LGBTQ community has a purchasing power of approximately $3.7 trillion internationally, the pink dollar is powerful. So whether you’re a LGBTQ individual or an ally, make your voice heard by protesting Adidas and their affiliated brands (i.e. Yeezy and Y-3).

No matter how desirable Yeezys are, no level of design justifies hatred. Especially when it takes away civil rights earned through literal blood and tears.