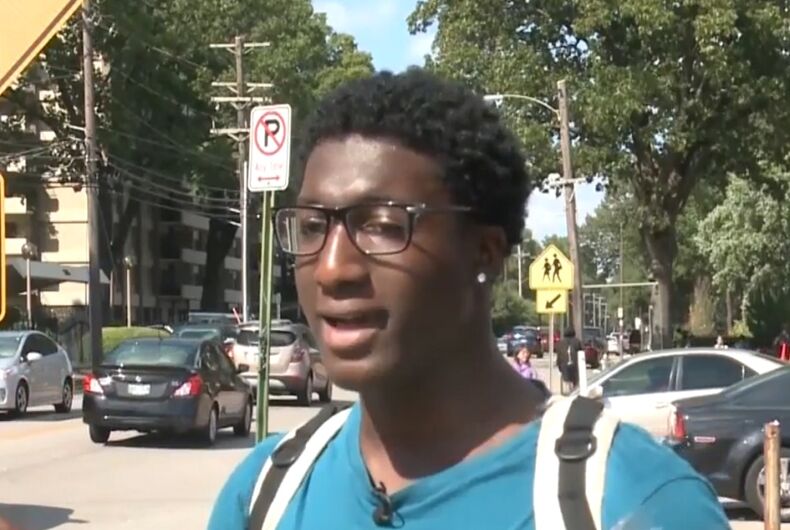 A gay teen was named Homecoming Royalty at his school, a title that he accepted in a shiny sequins gown.

Brandon Allen is a student at White Station High School in Memphis, Tennessee, and he told CBS News that he always knew that he was “a queen,” “that business,” and “that news.”

Related: This high school changed the way it crowns homecoming royalty to ensure a lesbian couple can win

A picture of him winning the title has gone viral, making him literally “that news.”

Last Friday at a football game, the school’s homecoming court was announced. Allen was announced as Homecoming Royalty, a gender-neutral title.

And when he walked on the football field in an amazing dress to get his tiara, bouquet of flowers, and sash, his classmates cheered him on.

Emmett Campbell, a junior at Allen’s school, took a picture of the event that went viral.

“It was such an incredible thing to witness,” Campbell, who identifies as transgender, told NBC News. “It was a moment of acceptance and validation for the LGBT+ community from our entire school.”

The picture even got the attention of a Queer Eye star.

What a beautiful picture

Some parents and community members were less than supportive and criticized him for winning on social media, but Principal Carrye Holland stood by him.

“Here’s the thing: It’s Brandon’s right to run for homecoming court under Title IX. It’s the students’ choice of who they want to support as homecoming royalty,” Holland wrote on Facebook.

“I’m exceedingly proud to be the principal of our amazing school.”

“Thank you to everyone who has contributed to me becoming queen. You guys truly looked stunningly beautiful and I am so honored to have been able to walk with you guys!”

Which design for the Pulse memorial will you choose?