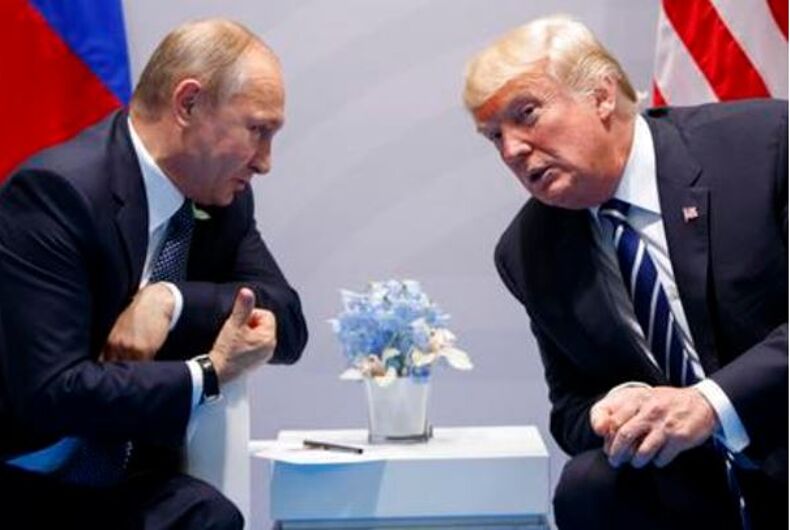 The same day that Donald Trump told the U.N. that the U.S. was committed to decriminalizing homosexuality globally, word came out about his phone call with Ukraine president Volodymyr Zelensky in which Trump gave a very good imitation of a mobster trying to extort dirt under the guise of asking for a favor.

The first event was quickly lost in the uproar over the second, but both were a gift to Trump’s favorite authoritarian leader, Russia’s Vladimir Putin.

Related: Russia is trying to take this gay couple’s kids away. So they’re fleeing the country.

The quid pro quo at the heart of the Ukraine scandal is easy to understand, no matter how much Republicans deny it. Russia invaded Ukraine five years ago, claiming the territory of Crimea as its own. Putin has long insisted that the two countries are meant to be one, united under Russia (and himself), even though Ukraine has been independent for 25 years.

Throughout the conflict with Russia, Ukraine has been dependent on aid from the U.S. and other western nations. Even though hundreds of millions were appropriated by Congress, Trump’s administration — apparently on orders of Trump himself — refused to distribute the money, for vague and ever-shifting reasons. Certainly, it looks like Trump was holding the money hostage until he got what he wanted from Zelensky.

Weakening Ukraine benefits Putin immensely. Trump’s actions send him a signal that the U.S. isn’t really all that committed to Ukraine. Just to prove the point, in his meeting with Zelensky last week, Trump told the Ukraine president, “I really hope that you and President Putin can get together and solve your problem” — when the problem is Putin’s lawlessness.

The political turmoil unleashed by the whistleblower complaint is just what Putin wants. He almost doesn’t need to interfere in the U.S. election this time (although he probably will) because Trump is doing his work for him.

Which brings us back to Trump’s U.N. speech. This was one of those pro-forma statements that administration likes to trot out to prove that it’s really much more humane and anti-authoritarian than reality indicates. But for Putin, that statement is also a gift because it doesn’t mention how he is one of the world’s worst offenders. It’s completely toothless.

All Trump said is a vaporous “we’re working with other nations to stop criminalizing homosexuality.” What that amounts to in terms of hard facts is impossible to say (probably because there aren’t any). But Putin’s Russia is a prime example of a vicious attack on the same LGBTQ people with whom Trump proclaimed to “stand in solidarity.” Instead of singling out Russia — or any nation, for that matter — Trump stuck to meaningless platitudes.

Moreover, the administration’s own actions tell Putin that he can keep up his bloody reign of terror on LGBTQ Russians. Trump has denied visas  to gay men facing death in Chechnya. Moreover, the administration has made it clear to the Supreme Court that, while it may not support murdering gay people, it’s perfectly fine with having them lose their jobs. Trump’s Department of Justice reaffirmed that just last week when it filed a brief in support of a Catholic school that fired a belowed gay teacher.

So what’s Putin’s takeaway from all of this? It’s a green light for him to keep doing everything he has been doing. There will never be any repercussions as long as Trump is in the White House. Trump will always have Putin’s back, at the expense of all the LGBTQ Russians facing discrimination and violence.