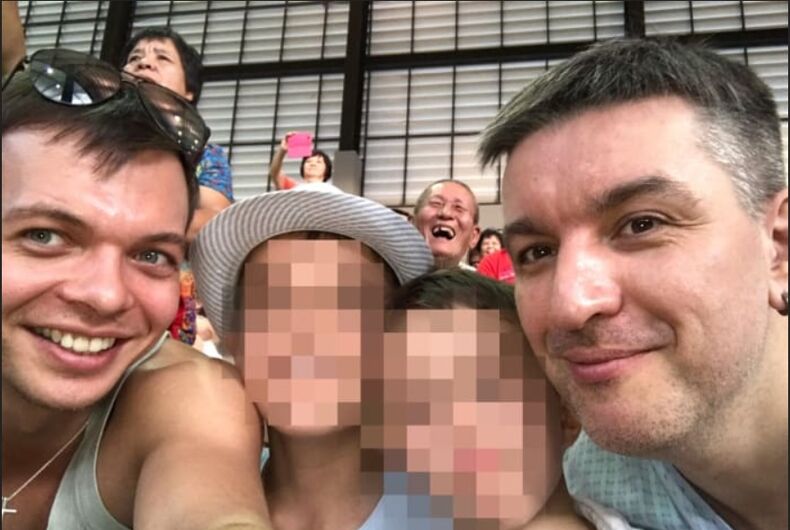 Russian same-sex couple Andrey Vaganov and Evgeny Erofeyev have been forced to flee Russia with their two adopted sons for the “crime” of caring for their adopted kids under the country’s infamous 2013 federal law forbidding “propaganda of nontraditional sexual relationships.”

As we reported last month, the fathers — who married in Denmark before adopting their now 12- and 14-year-old sons in 2009 and 2011 — brought their sons to a Moscow hospital in June for a suspected case of appendicitis.

Doctors then alerted the Investigative Committee of Russia, and the Committee later charged the adoption agency with “negligence” for allowing the kids to be adopted by a gay man.

The appendicitis turned out to be a case of overeating, but authorities questioned the fathers the next morning and examined their younger son, Yuri, for signs of sexual and physical abuse. The men’s lawyer advised them to prepare to leave Russia at a moment’s notice, according to Buzzfeed News, because the country would likely try to place the sons in foster care.

A few days later, the authorities suggested that Yuri be turned over to a state-owned rehabilitation center while the case was investigated, Erofeyev and Vaganov decided it was time to get out of Russia. Not long after they packed their bags and left the country with their sons, investigators demanded that they turn themselves in for questioning. At one point, according to Vaganov, the authorities were considered charging the couple with murder of the children if they didn’t show up, even though Yuri’s forensic testing showed no signs of physical abuse.

Though Russia’s anti-gay propaganda law has been used as a justification to shut down LGBTQ websites, film festivals, arrest pro-LGBTQ activists and fire LGBTQ-identified teachers, this is the first time it has been formally cited by the government agents to destroy a same-sex family.

It’s all the more tragic when you consider that the law wasn’t created until 2013, years after Erofeyev and Vaganov adopted their kids.

IMDb announced that it will no longer deadname transgender celebrities