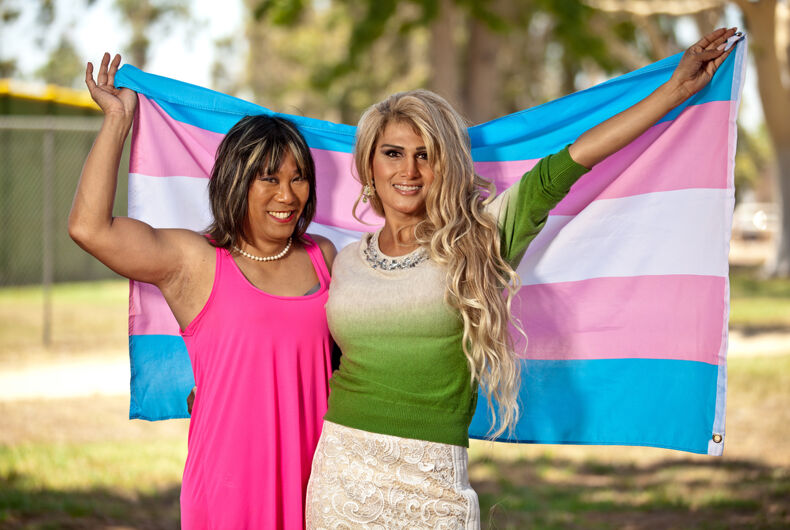 Yesterday, thousands of transgender people and allies marched in the National Transgender Visibility March on Washington D.C.. While many demonstrators marched in opposition to the Trump administration’s repeated attacks on trans rights, trans women of color (TWOC) marched front and center to highlight the continued wave of violence they and other trans women face.

Related: Alexandra Billings is about to make transgender history on Broadway

In the days leading up to the march, its national organizing director, Marissa Miller (a black, trans woman living with HIV), told The Washington Blade:

“The march and related events will also focus on the dangers faced by transgender people in their daily lives as demonstrated by at least 18 and possibly more murders of transgender women in the U.S. so far this year who were believed to have been targeted because of their gender identity and expression. Seventeen of those 18 were trans women of color.”

The Saturday march began with a two-hour rally from 9-11 a.m. at Freedom Plaza where 11 of the 14 speakers were people of color.

Here’s a complete video of the rally:

Various participants shared images from the march via social media (below).

One of the largest banners asked (in all caps), “How many of us have to die for you to get involved?” Simultaneously, a contingent of marchers advocated for protecting trans women by decriminalizing sex work, a professional sometimes taken by trans women to gain economic security amid widespread discrimination.

Here are shots from the march:

At the #March4TransEquality on this historic morning with so many amazing advocates & allies. We are here to come together for trans equality & to address a crisis of anti-trans violence shattering lives across this country. The time is now for action. pic.twitter.com/tP6AfMCUD7

Veteran Kiara St James co-founder of @NYTransAdvocacy and instrumental in the passage of transgender protections bill GENDA in New York State after 20 years of advocacy. A community shero.#TransMarchOnDC #March4TransEquality pic.twitter.com/FPVKxmj6Kx

This is Monica Helms. The creator of the Trans Pride Flag. #march4transequality #trans #transgender #transpride pic.twitter.com/WOoDzD7lpf

The banner that led the march:
" how many of us have to die for you to get involved?" #March4TransEquality pic.twitter.com/tO50aMPLT8

.@TS_Candii advocating for @DecrimNY of sex work, who affects by criminalizing and destroying lives of mostly transgender women of color, many of whom do it as survival economy in a society that marginalized and discriminate against them. #TransMarchOnDC #March4TransEquality pic.twitter.com/bkHt1yQQDi

“Many of the participants [arrived] on buses and flights arranged and paid for by a special scholarship fund set up for those who don’t have the financial means to travel to D.C.,” writes The Washington Blade.

Along with the march, the weekend’s events also featured panel discussions on healing the community, conquering financial anxiety and sharing trans stories with loved ones and the media.