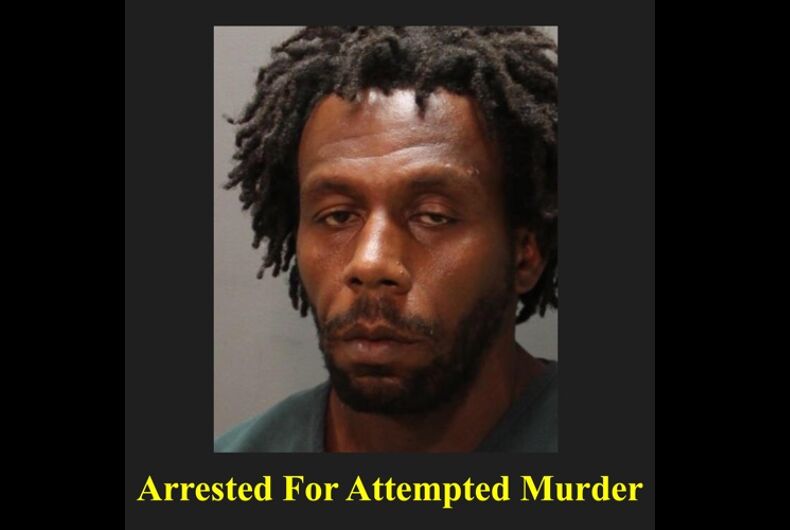 UPDATE: This story originally identified the victim as a transgender woman. New information reveals that the previous unnamed victim, Demetrick Jones, identified as a gay man who sometimes dressed as a woman. The story has been changed to reflect the new information.

A gay man was severely beaten and then tied to the bumper of a minivan and dragged for two blocks behind the moving vehicle. The victim, who hasn’t been named yet, was taken to the hospital with life-threatening injuries.

Jacksonville, Florida, police refused to release the video footage from the city’s Real Time Crime Center, but the incident was recorded. A department spokesperson showed clips from the footage that showed the vehicle but said the video was too graphic to be distributed to the public.

Related: A man responsible for one of America’s most brutal hate crimes will be executed today

Eric Shaun Bridges has been arrested for attempted murder after tips led to the discovery of the vehicle and pointed to his involvement.

Witnesses told authorities that the incident started inside of a unit at the Majestic Plaza Apartment complex. Officers think the victim was beaten inside the apartment and may have been unconscious when he was pulled out of the unit and tied to the bumper of the vehicle.

“They seen him dragging down the street with a rope,” the complex’s maintenance worker told News4.

The perpetrator dragged him for two blocks before getting out and cutting the rope. The victim was left in the street.

Police believe the vehicle was a silver or light-colored Dodge Caravan. The license plate cannot be read in the released photos.

The attack is reminiscent of the racially-motivated murder of James Byrd, Jr., in 1998. Byrd was dragged behind a pickup truck for miles by three white supremacists. The killing made national news and spurred calls for a federal hate crimes law.

The resulting law, the Matthew Shepard and James Byrd Jr. Hate Crimes Prevention Act, honors both the life of Byrd, but also Matthew Shepard, a young gay man who was beaten and tied to a fence to die in Wyoming.

An actress who made anti-gay comments lost a role. Now she’s suing for ‘religious discrimination.’