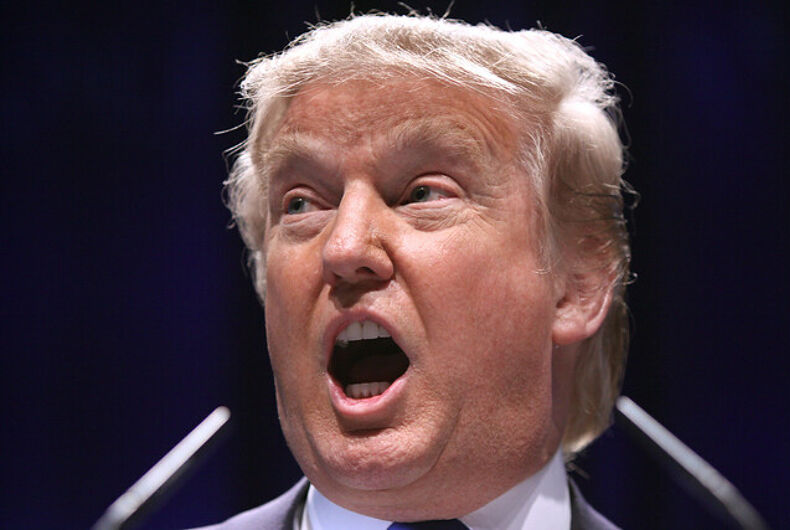 The enthusiasm of conservative evangelicals for President Trump has always been a bit of a head-scratcher. After all, Trump’s relationship with morality is largely to flout it, yet the religious right is head over heels with the president, especially for the extremist judges that he’s been nominating to the federal bench.

But it turns out there is one thing about Trump that really bothers religious conservatives. It’s not locking up immigrant children in cages, flirting with the world’s worst dictators or fanning the flames of white supremacy.

According to a story on Politico, evangelicals cringe every time Trump let’s loose with a string of profanities. The phrase that most sets them off is “God damn it,” which Trump liberally sprinkles throughout his ramblings at rallies.

From the perspective of his evangelical supporters, that expression violates one of the ten commandments. (Trump’s repeated offenses against other commandments doesn’t seem to bother them as much.)

“I’ve had people come to me and say, ‘You know I voted for [Trump], but if he doesn’t tone down the rhetoric, I might just stay home this time,’” West Virginia State Senator Paul Hardesty told Politico. Hardesty even wrote a letter to the White House asking the president to refrain from such language in the future.

The odds that Trump’s supporters will sit out next year’s election because of foul language are pretty slim. After everything that they’ve swallowed already, giving Trump a pass on cursing seems a small concession.

“We all wish he would be a little more careful with his language, but it’s not anything that’s a deal breaker, and it’s not something we’re going to get morally indignant about,” Trump apologist Jerry Falwell Jr., told Politico.

In fact, if anything, Trump’s vulgarity is what endears him to the religious right. Most pundits think that religious conservatives have embraced Trump despite his personality. But a recent Washington Post story suggests that Trump’s bullying is exactly the reason they like him.

“I think conservatives for decades have felt bullied by the left, and the default response was to roll over and take it,” megachurch pastor Robert Jeffress told the paper. (Jeffress is one of Trump’s biggest supporters with a long record of attacks on LGBTQ rights.)

Instead, evangelicals like Trump’s eye-for-an-eye philosophy. For a group of people who feel themselves under siege, Trump is the ideal protector.

And if that comes with a little profanity – well, warriors are forgiven their excesses.