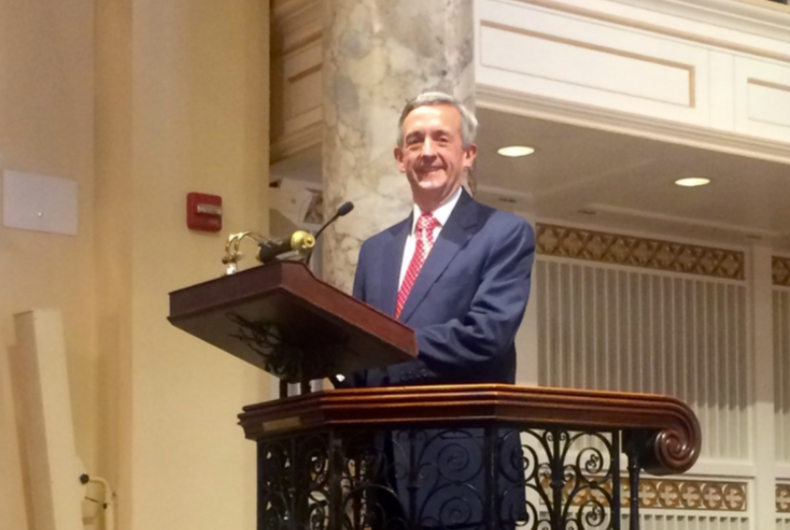 Anti-gay evangelical Pastor Robert Jeffries was slated to deliver a sermon at a private inaugural service for Donald Trump's inauguration.Photo: Via Twitter
A Texas megachurch pastor with a reputation for demeaning LGBTQ people was scheduled to deliver the sermon at a private religious service this morning at St. John’s Episcopal Church as part of Donald Trump’s inauguration, CNN confirmed.

Pastor Robert Jeffries, a Southern Baptist who campaigned for Trump and is a member of his evangelical advisory board, leads First Baptist Church in Dallas and has blamed gays for paving the way for the Antichrist.
“What is happening is that we are becoming desensitized to the persecution of Christians just not globally, but also in our Country. The fact is that we are being told that Christians who refuse to serve a wedding cake to a gay couple, that they are extremists, its OK to take their livelihood and shut down their business,” Jeffress said on a Christian talk show promoting his book Countdown to the Apocalypse: Why ISIS and Ebola Are Only the Beginning in 2015. “I believe that we are getting desensitized to that, which will pave the way for that future world dictator, the Antichrist, to persecute and martyr Christians without any repercussions what-so-ever.”

Right Wing Watch notes that gays are a frequent scapegoat in Jeffries’ sermons:

No fan of the gay community, Jeffress believes that gays and lesbians are “perverse” people who are either pedophiles or likely to abuse children in the future; compared homosexuality to bestiality and called it “a miserable lifestyle”; accused gay people of using “brainwashing techniques” to have homosexuality “crammed down our throats”; said that gay people “are engaged in the most detestable, unclean, abominable acts you can imagine”; predicted that the gay rights movement “will pave the way for that future world dictator, the Antichrist”; and labeled homosexuality a “filthy practice” that will lead to the “implosion of our country.”

Jeffries’ inclusion in the inaugural events is troubling to LGBTQ advocates, who worry about the message it sends for the incoming president to endorse Jeffries views.
“The inauguration and the people invited to pray at the inauguration speak to the values and the agenda of the incoming president,” Ross Murray, director of programs for GLAAD, told CNN. “Jeffress’ anti-LGBTQ message is now going to be tied to this administration and its policies.”
But Jeffries hasn’t just maligned the LGBTQ community. He has also been criticized for insulting Muslims, Jews, Catholics, and Mormons, often portraying the adherents of other faiths and sects of Christianity as “evil” or inspired by Satan.

But an official involved in the planning of Trump’s inauguration told CNN that characterizations of the religious leader as divisive are wrong: “Pastor Jeffress is a unifying figure representing a diverse spectrum of Americans. Any attempt to vilify this religious leader is deeply disappointing and misplaced.”

According to Rev. Luis León, rector of St. John’s Episcopal, a host of other right-wing evangelicals were scheduled to be in attendance, including Liberty University’s Jerry Falwall, Jr., Focus on the Family’s James Dobson, and televangelist James Robison.
The inauguration morning service is a longstanding tradition for incoming presidents, with only Richard Nixon bowing out since Franklin Roosevelt. Despite the guest list for Trump’s inaugural service, St. John’s has a reputation for being accepting of the LGBTQ community and people of other faiths.
News
anti-Jew, anti-Muslim, church service, Donald Trump, evangelicals, Inauguration 2017, Inauguration Day, Prayer, Robert Jeffries

Ellen’s emotional tribute to President Obama: Thanks ‘for changing my life’