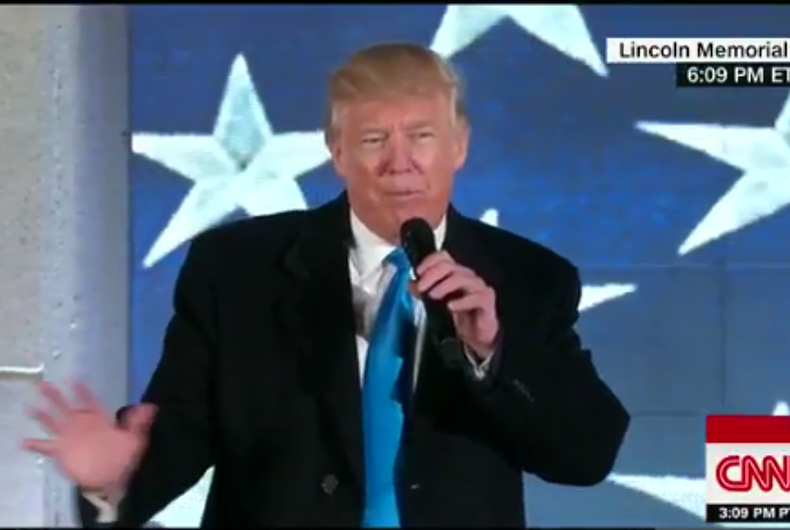 Supporters of Donald Trump flocked to the Lincoln Memorial for the “Make America Great Again Welcome Concert” on Thursday night, one day ahead of the inauguration.

The event featured performances by Toby Keith, Three Doors Down, and others, as well as remarks from actor John Voight and President-elect Trump himself.

While protesters have also come to Washington, D.C. to make their voices heard during the inauguration weekend, with a huge crowd expected at the Women’s March on Saturday, there were few dissenters among the throng.

Two supporters who traveled from Buffalo, New York to be a part of the festivities told us they hoped Trump would make good on campaign promises such as defeating ISIS, repealing Obamacare and building a wall along the border.

An individual dressed as a polar bear hung out just outside the National Mall with a sign reading, “#Earth2Trump Climate Denial = Extinction.” He took pictures with those who asked but remained silent.

This polar bear has a message for #Trump. #TrumpInauguration pic.twitter.com/BNSJgS21XD

Much of the below the belt pro-Trump, anti-Hillary merchandise that had been seen throughout the campaign was also for sale at the event, in spite of the election’s end.

"Capitalism, I love it," said one Trump supporter. pic.twitter.com/uEFi54XHwl

#Trump takes the stage at the Welcome Center to applause. #TrumpInauguration pic.twitter.com/WnkCj7AxwI

Trump delivered his remarks at the end of the event, praising the “movement like we’ve never seen anywhere in the world,” saying they would “unify our country.” That stands in contrast to much of his campaign rhetoric, as well as much of what he has said since winning the election in November, including sending out a New Year’s Eve tweet that mentioned his “many enemies and those who have fought me and lost so badly they just don’t know what to do.”

Donald Trump: "There's never been a movement like this… We're going to unify our country" https://t.co/UYpqI3w42L https://t.co/HZsy1EHSRB

He also promised that his supporters would “not be forgotten anymore.”

Trump added that he would be cheering them on tomorrow at the inauguration.

"I'll see you tomorrow," President-elect Donald Trump says. "…and I'm going to be cheering you on." https://t.co/H9n7JKbYS7 pic.twitter.com/fw11OpZmIB

Meanwhile, an anti-Trump protest is taking place in front of the Trump International Hotel and Tower in New York City. Celebrities such as Robert De Niro, Michael Moore, Sally Field and Mark Ruffalo are in attendance, speaking out against the upcoming Trump administration.

Watch the event below.

Update: This article was edited to correct a misspelling of Sally Field’s name. We regret the error.

Pastor Kevin Swanson: ‘Highlights’ magazine is no better than ISIS