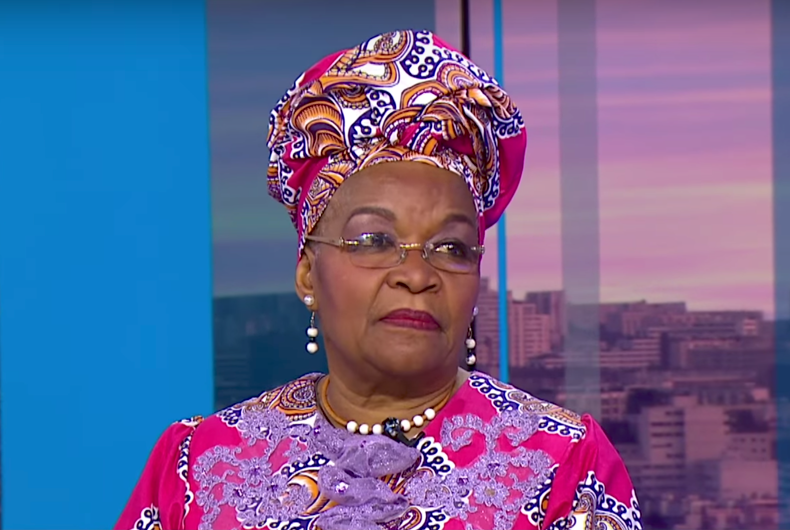 Alice Nkom is a human rights lawyer. She defends the rights of the LGBTQ community in Cameroon. Photo: Screenshot/ YouTube

Out of more than 2,000 lawyers in Cameroon, Alice Nkom and her colleague Michel Togué are the only two prepared to defend the human rights of the local LGBTQ community. Nkom has devoted her life to upholding these rights, as the queer community has always faced violence and brutality.

In Cameroon, same-sex relationships are banned under the criminal code. Those convicted receive between six months and five years in prison, and fines ranging between 20,000 and 200,000 West African CFA Francs. That coverts to approximately $345 U.S.

Nkom founded the Association for the Defence of Homosexuals (ADEFHO), which is the only organization in Cameroon to advocate for the human rights of the LGBTQ community. Through this organization, Nkom has tirelessly defended those convicted and imprisoned. She is also challenging these laws, and encouraging their repeal as soon as possible.

The LGBTQ community is highly frowned upon in Cameroon. Many people who are even suspected of engaging in same-sex acts have been arrested on several occasions. In 2005, 11 men were arrested because they were suspected of sodomy. The government threatened to do a medical examination to prove the suspicions. All 11 of them were detained for one year before their trials in March 2006.

In 2011, two men were arrested for homosexuality outside of a nightclub solely based on their appearance. They were both convicted, and sentenced to five years in prison.

In May, 2018, 25 men were arrested in a gay bar. They were beaten by police, before being taken to police headquarters where they were denied food and water for two days.

Needless to say, Nkom has no shortage of work. But she has also faced her fair share of punishment for her work.

She was detained without charge in 2011 while she was visiting clients, and has received many death threats. Other lawyers in Cameroon have accused her of “spoiling the youth,” and have publicly said that she should be put to death, Nkom recalled in an interview with The Guardian.

Nkom was also brought before the Bar because the Minister of Justice thought that she was “promoting homosexuality.”

Nkom is a crucial part of Cameroonian advocacy, and stresses the necessity for change in regards to the LGBTQ community.

“I know there’s a risk but when you are doing something that is right, you just do it and take care,” Nkom said. “Someone has to do this.”