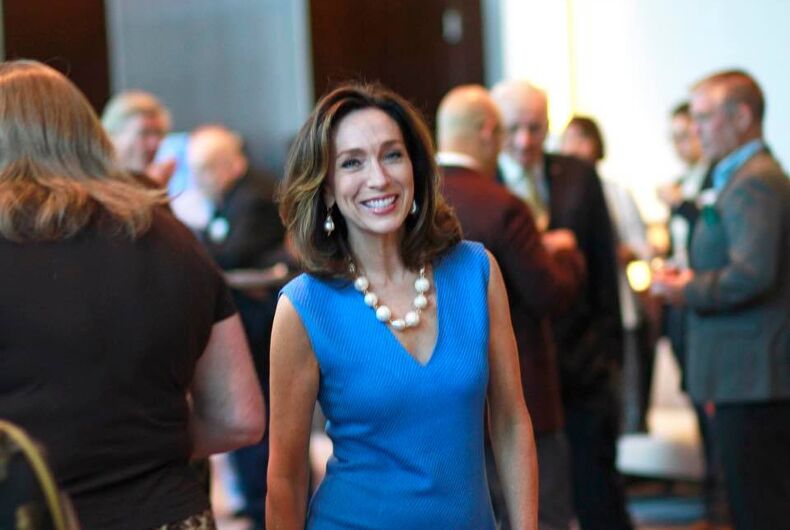 There was an audible sigh of disappointment when Democrat Stacey Abrams, who came so close to being elected governor of Georgia last year, decided to sit out next year’s race for Senate. Abrams had proven a formidable candidate in a state generally considered a GOP slam dunk. She was a vocal supporter of LGBTQ rights in a way Georgia wasn’t used to seeing, especially since the issue is still considered a high-risk gamble in the South.

But next year’s race may not be that different. So far the only declared Democratic candidate is Teresa Tomlinson, the former mayor of Columbus, Georgia. And as Tomlinson made clear at a recent Georgia Equality fundraiser, she was supporting LGBTQ rights in Georgia long before it was popular — and she didn’t give a rip what people thought.

In 2004, Tomlinson wrote a letter to the local Columbus newspaper decrying the state’s rush to pass a marriage equality ban. She recognized the potential for fallout, but dismissed it — with a vengeance.

“I didn’t care if I was ever invited to another dinner party or placed on another Christmas card list or elected to anything,” she said. “And though that measure shockingly passed with 76 percent of the vote, they could kiss my ass if they thought I would stand down for this.”

That attitude apparently dates back well before 2004. Tomlinson, 54, started started out as a Republican, but decided to leave the party when she was in her early 20s when she saw people going after candidates on the basis of their sexuality. Not much has changed, she told the crowd.

“I knew that if a person went to the Pandora’s box of bigotry in an effort to acquire power, it would be effective and addictive,” she said. “I was right, and here we are today in a pitched battle for our civic souls. We are constantly being pitted against one another so that others can acquire power.”

Related: Republicans are falling all over themselves to condemn Roy Moore’s second bid for the Senate

Tomlinson has a personal stake in the issue: Tonya Pike, Tomlinson’s sister who introduced her at the fundraiser, is a lesbian. While Tomlinson is the only Democrat in the race so far, Sarah Riggs Amico, a former Democratic candidate for Georgia lieutenant governor, is expected to join the race. Jon Ossoff, who narrowly lost a special Congressional election in 2017, is reportedly also considering a bid. The nominee will eventually face incumbent Republican David Perdue, who is co-sponsor of a bill that would allow companies to discriminate against LGBTQ people on First Amendment grounds.