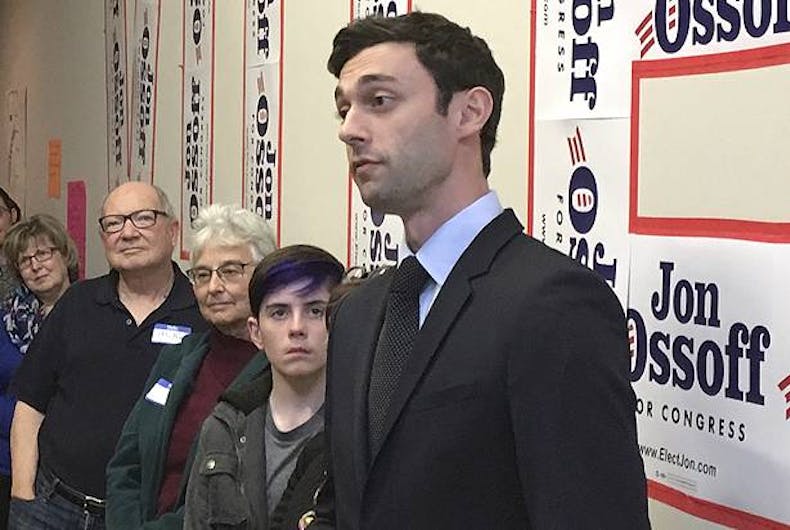 Jon Ossoff came close to winning outright in the Georgia special election, will now face a runoff in June. Photo:

Ossoff will face former Secretary of State Karen Handel, who received the most votes among the many Republicans in the running, in the June election.

Ossoff, who raised a staggering $8.3 million and received celebrity support from the likes of Samuel L. Jackson, will have to prevent the Republican base from rallying around Handel if he wants to become the first Democrat to hold the seat in two decades. It was left open when President Trump appointed Tom Price Secretary of Health and Human Services.

The race for the seat drew national attention, as Ossoff, an investigative filmmaker and former congressional staffer, ran on a slogan of “Make Trump Furious.” Trump took the bait, sending out a flurry of tweets going after Ossoff, saying he would “be a disaster in Congress” and that he would be “VERY weak on crime and illegal immigration, bad for jobs and wants higher taxes.” He also recorded a robocall criticizing the Democrat.

Dems failed in Kansas and are now failing in Georgia. Great job Karen Handel! It is now Hollywood vs. Georgia on June 20th.

An all-out win yesterday could have sent a clear message that the backlash against Trump, witnessed through protests out in the streets, could have real electoral consequences. Progressives hoped it could cause Republican leadership to temper their actions and provide a much needed morale boost to their side, giving momentum for the Democrats to take back the House.

Even still, Ossoff coming as close as he did should make those on the right nervous. And while the race against a single Republican candidate will be more daunting, it would be unwise to count the young Democrat out.

It would be particularly sweet for the LGBTQ community to see Price, whose anti-LGBTQ record includes voting against prohibiting job discrimination based on sexual orientation and against enforcing hate crime legislation, replaced by a pro-LGBTQ candidate.

Ossoff told the Georgia Voice he would be “a strong and outspoken ally of the LGBTQ community.”

“As our representative in Congress, Jon will fight tirelessly against discrimination, hate speech, or violence against Americans on the basis of their race, religion, gender, sexual orientation, or place of birth,” his campaign website promises.

Handel has a complicated history with LGBTQ rights, as Project Q Atlanta notes:

In the early 2000s as a candidate for the Fulton County Commission and later its chair, Handel sought out LGBT support and became a member of the Log Cabin Republicans. As chair of the commission, Handel supported a grant for a non-profit that helped LGBT youth.

But by 2006, when she was elected Secretary of State, and later in a hotly contested GOP primary for governor in 2010, Handel disavowed her LGBT-friendly positions of the past. She came out against civil unions and same-sex marriage, said she agreed with banning adoptions by gay parents, criticized “liberal judges” for striking down a gay marriage ban in California, and opposed federal benefits for LGBT domestic partners.

According to On The Issues, Handel’s campaign website in 2010 read:

“Marriage is between a man and a woman only. To anyone who thinks otherwise, I say, ‘Bring it on.'”

She tried walking back her anti-LGBTQ past while announcing her candidacy for the Georgia 6th District race.

“It’s no secret that I’m called to a different place, maybe, for some of the beliefs in the LGBTQ community because of my faith,” Handel said during a press conference. “With that said, I’m also called to be accepting and compassionate.”

The majority of the LGBTQ community will know better than to fall for friendly talk when it is most convenient. While Ossoff is also unproven, it is much easier to see Handel running an anti-LGBTQ agenda than the young Democrat who has never spoken in favor of limiting our rights.

After all, Trump promised to support LGBTQ people also, despite his numerous anti-LGBTQ appointments, most recently Scott Garrett to head up the Export-Import Bank.

One thing is for certain, it will be an interesting two month campaign as Ossoff and Handel, and by extension the Democratic and Republican parties, duke it out. Stay tuned.