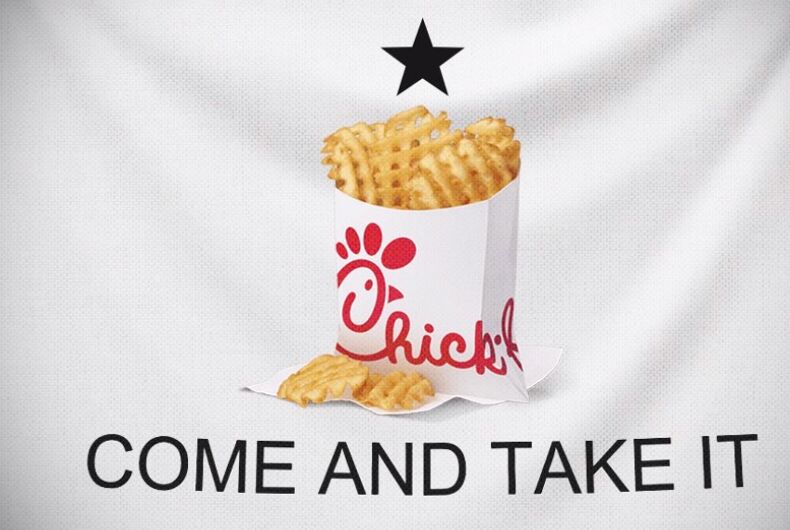 After the San Antonio city council voted to ban the chicken chain from the local airport over its history of donating millions of dollars to anti-LGBTQ groups, Paxton says he will investigate for “potential First Amendment violations” according to the Texas Tribune.

“The Constitution’s protection of religious liberty is somehow even better than Chick-fil-A’s chicken,” Paxton wrote in a Thursday letter sent to San Antonio Mayor Ron Nirenberg and the rest of the city council.

“Unfortunately, I have serious concerns that both are under assault at the San Antonio airport.”

Paxton claims Treviño’s statement and a fellow councilor’s reference to the chain as a “symbol of hate” shows animus toward the chicken restaurant’s “religious liberty.” He cited the recent Masterpiece Cakeshop decision by the US Supreme Court as justification for his claim.

The three recent decisions are the trifecta of the religious right’s recent push to give Christians a license to discriminate against LGBTQ people and other minority groups.

Paradies Lagardère, a company that operates restaurants and shops in airports, had applied to open several concessions in 10,000 sq ft of space in one of the airport’s terminals. The application was approved with the stipulation that Chick-fil-A not be included as an option.

“Everyone has a place here, and everyone should feel welcome when they walk through our airport,” Treviño said. “I look forward to the announcement of a suitable replacement by Paradies.”

After announcing his decision to investigate, Paxton tweeted an image of the chain’s waffle fries with the historic Texan slogan “come and take it.”

The City of San Antonio’s decision to exclude Chick-fil-A based on the religious beliefs associated with the company and its owners is the opposite of tolerance. It’s discriminatory, and not only out of step with Texas values, but inconsistent with the Constitution and Texas law. pic.twitter.com/iOk7G9Eltv