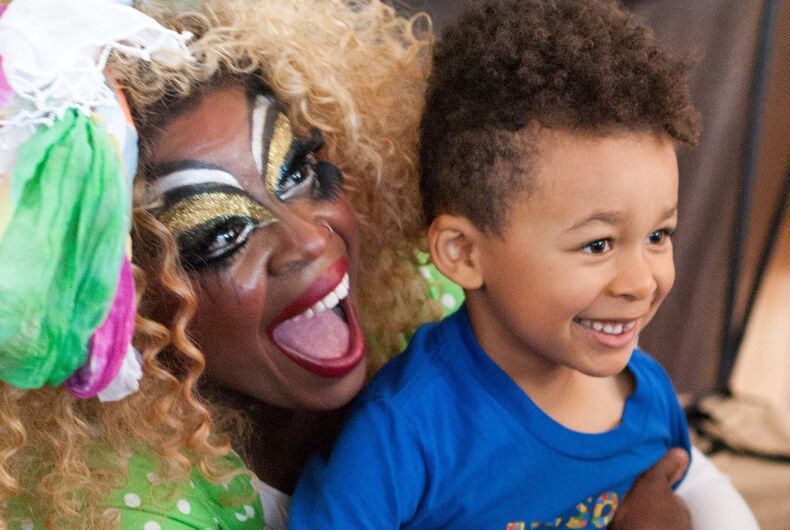 Protestors and counter-protestors gathered at a recent Drag Queen Story Hour event at a library in Evansville, Indiana yesterday.

Approximately 275 children and guardians attended to hear one of four storybook reading sessions host by a drag performer Owen Jackson (aka. Florintine Dawn). An additional 150+ kids and their guardians were turned away due to capacity, but were able to participate in other activities around the venue.

Meanwhile, about 25 protestors and counter-protests gathered outside, separated by police without incident.

Courier & Press reports 26 police attended to quell protestors along with “one confirmed Department of Homeland Security officer who was armed.”

An alternative children’s book reading was concurrently held at The Gathering Church nearby. The church’s Women’s pastor April Harris said the church “wanted to provide another option for those who felt bothered by Drag Queen Story Hour.”

Various protesters have started to arrive at EVPL pic.twitter.com/CKZst8OHEs

The drag performer read The Very Hungry Caterpillar, Brown Bear, Brown Bear, What Do You See? and Goodnight Moon, none of which have LGBTQ themes. Kids also danced to “The Hokey Pokey,” “Head, Shoulders, Knees, and Toes” and “the Freeze Dance.”

In a statement, the Evansville Vanderburgh Public Library wrote:

This event was intended as a way for local families to engage their children’s imaginations, encourage self-expression, and to explore difference.

At this time, there are no additional Drag Queen Story Hour events planned at EVPL. However, EVPL will be assessing feedback to determine whether or not to have similar events in the future.

Anti-LGBTQ opponents of Drag Queen Story Hour have tried suing cities whose libraries host them, though the cases have been laughed out of court. Conservatives have also mentioned the event in political attack ads. Near the end of January, one armed protestor was arrested after storming such an event in Houston.

Ian McKellen discusses drug use, coming out and surviving the HIV epidemic in a candid chat