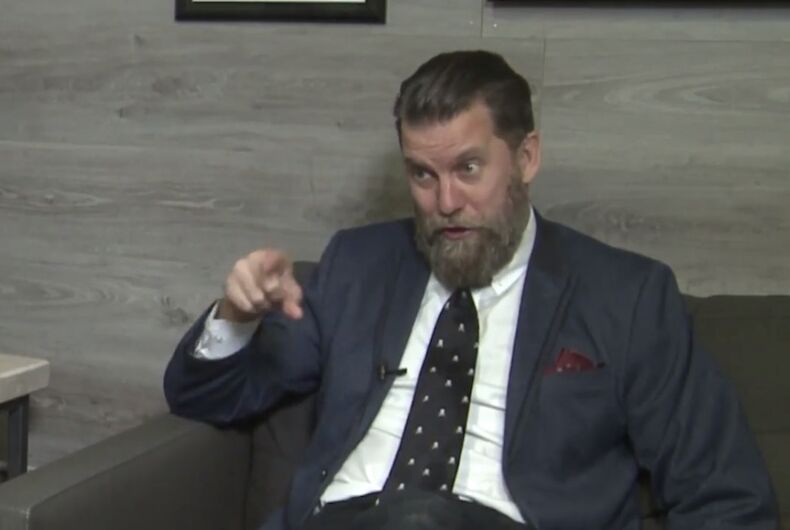 When residents of Westchester County, New York realized that hate group founder Gavin McInnes lived among them, they began posting yard signs that read, “Hate has no home here.” In response, McInnes blasted his neighbors on his popular podcast and his wife, Emily, threatened them with legal action, reports The Huffington Post.

He is also the 48-year-old host of the podcast Get Off My Lawn, a right-wing show that regularly rails against so-called “politically correct” speech. McInnes himself has far-right, white supremacist views, including referring to trans people as “gender n—ers” and “mentally ill gays” and calling Muslims a bunch of interbreeding child-rapists.

Related: It should be a hate crime to punch a Nazi according to white supremacist Gavin McInnes

When the yard signs began appearing in McInnes’ neighborhood, Emily McInnes got on the community social media app Nextdoor and “intimidated and harassed several neighbors in response to their anti-hate signs, threatening legal action or accusing them in private messages of coming after her family. On multiple occasions, the recipients notified police,” The Huffington Post reports.

I assure you as a Native American woman raised with a full-blood mother and a longtime liberal, my heart is full and open to all…. Gavin founded a beer drinking club that was fond of Animal House and humor…. He NEVER led a hate group…. Again, why not ask us questions? We will meet or talk any time. And PLEASE from the bottom of my heart let my sweet kind-hearted children have some peace.

On his podcast, Gavin McInnes referred to his neighbors as “c-nty… assholes” and said that the “Hate has no home here” signs were only displayed by “a r-tard who makes redundant points.”

Emily McInnes is reportedly suing the Southern Poverty Law Center for “defamation” after they listed The Proud Boys as a hate group. She also claims that she didn’t threaten any neighbors on Nextdoor.

In November 2018, Gavin McInnes formally stepped down as the leader of The Proud Boys a week after the FBI announced the group’s ties to white nationalism. He did so partly to help exonerate several Proud Boys charged with attacking a counter-protestor at a New York City event McInness spoke at.