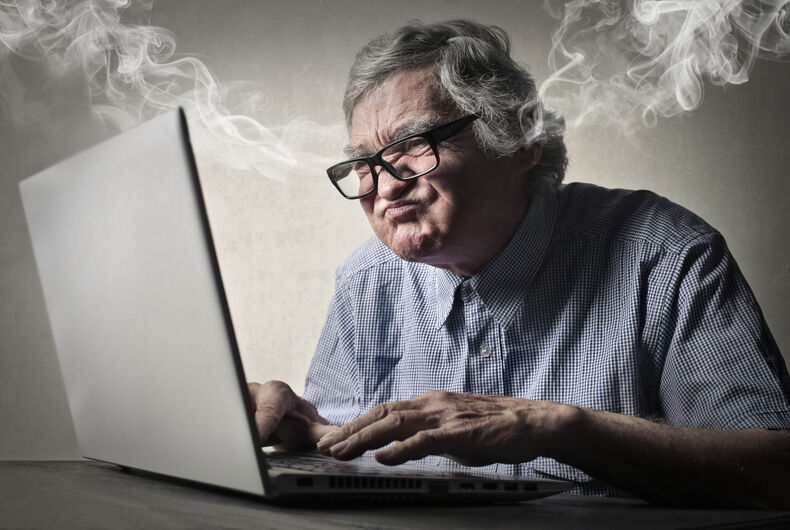 Try to act shocked, but a recent study found that older, conservative web users share links to fake news sites via social media more often than any other groups.

The study, published in the journal Science Advances, interviewed 2,711 Facebook users to examine how often people from different demographics shared links to debunked news sites during the 2016 U.S. presidential election.

The Associated Press explains some of the researcher’s methodology:

The researchers used three different lists of false information sites — one compiled by BuzzFeed and two others from academic research teams — and counted how often people shared from those sites. Then to double check, they looked at 897 specific articles that had been found false by fact checkers and saw how often those were spread.

Researchers found that Facebook users over the age of 65 shared links to fake news sites seven times more often than users between ages 18 and 29, and more than twice as often as people ages 45 to 65.

This doesn’t necessarily mean that conservatives and older people are more gullible. It might merely reflect the fact that there was far more fake news aimed at older and conservative social media users during the 2016 elections, especially thanks to Russian troll farms trying to sway public opinion.

Researchers also think that older web users could have a lower amount of “digital literacy” helping them detect fake news. Either way, one lead researcher said sharing false information is “less about beliefs in the facts of a story than about signaling one’s partisan identity,” which explains why pointing out the incorrectness of fake news does little to dissuade others from sharing it.

Race, gender or income were found to have no statistical bearing on whether one shared more or less fake news:

[A lead researcher] said in an email that conservatives post more false information because they tend to be more extreme, with less ideological variation than their liberal counterparts and they take their lead from President Trump, who “advocates, supports, shares and produces fake news/misinformation on a regular basis.”

A lead researcher warned people against drawing too many over-arching conclusions from their findings since their study focused specifically on Facebook during the 2016 election. “If we were to run this study again,” he said, “we might not get the same results.”

Trans people are planning a massive march on Washington