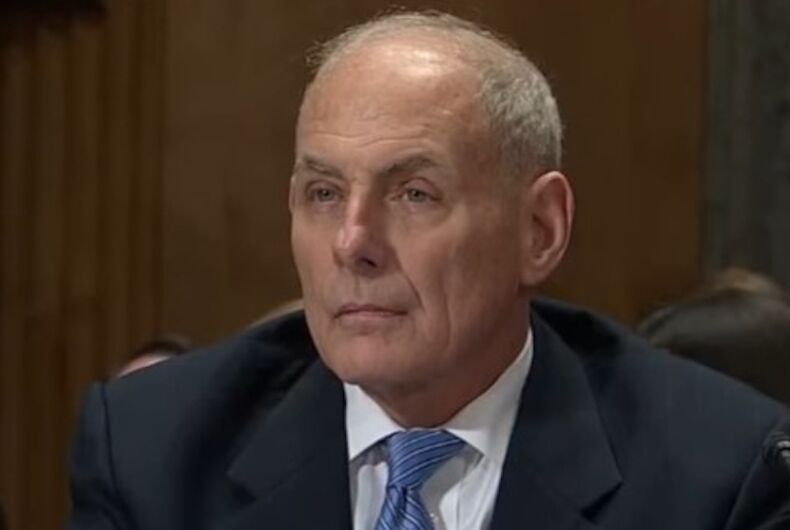 Yesterday, U.S. President Donald Trump announced that his current White House Chief of Staff, John Kelly, will leave by the end of the year. As the press speculates about his possible replacement — top aide Nick Ayers is a rumored candidate — let us take a second to remember that Kelly was no friend to LGBTQ people (or marginalized communities in general).

Kelly is a retired general from the US Marines who, under the Obama administration, opposed the repeal of Don’t Ask, Don’t Tell, the US military’s ban on openly gay soldiers. He reportedly said of its 2011 repeal, “Marines will die from this.” In truth, the repeal had no discernible negative affects on military readiness.

Kelly himself admitted that he’d never had a long conversation on LGBTQ rights until 2015 when he met with human rights activists in Cartagena, Colombia. He was 65 at the time.

From December 2016 to July 2017, Kelly served as Trump’s Secretary of Homeland Security.

As Secretary, USA Today reports, “Kelly oversaw some of the most controversial policies of Trump’s agenda, including a travel ban targeting several majority-Muslim countries, a reduction in refugee admissions and stepped-up deportations of undocumented immigrants.”

These policies negatively effected LGBTQ immigrants fleeing anti-queer persecution in their South and Central American home countries as well as those seeking asylum in the US.

As Secretary, Kelly was also a vocal supporter of Trump’s wall at the US southern border, calling it “essential” for keeping out drugs and terrorists (continuing Trump’s untrue assertion that most southern immigrants are criminals). The wall, which Trump swore Mexico would pay for, will cost US taxpayers anywhere from $15 to $25 billion (or much more).

In July 2017, Kelly stepped in as Chief of Staff after the resignation of former Republican National Committee Chairperson Reince Priebus. Kelly was seen as a taming the unfocused president, even ousting his racist Chief Strategist Steve Bannon and loudmouth Communications Director Anthony Scaramucci within days of his appointment.

But Kelley continued spouting racist nonsense. In an October 2017 interview, Kelly said the US Civil War happened over a “lack of ability to compromise” — presumably over slavery, though northern and southern states did try various compromises over the odious institution. He also called Confederate leader Robert E. Lee, “an honorable man who gave up his country to fight for his state.”

But, as Vox.com reports, “while Kelly did get credit for stabilizing the White House’s internal functioning, one thing he didn’t do — and really, didn’t even try to do — was change the president.” Most notably, he stood by while Trump issued his infamous trans military ban via Twitter on July 26, 2017.

Granted, it’s rare for Chiefs of Staff to oppose presidential pronouncements. But before anyone starts praising Kelly for taming Trump, the record shows he was no ally for marginalized people.