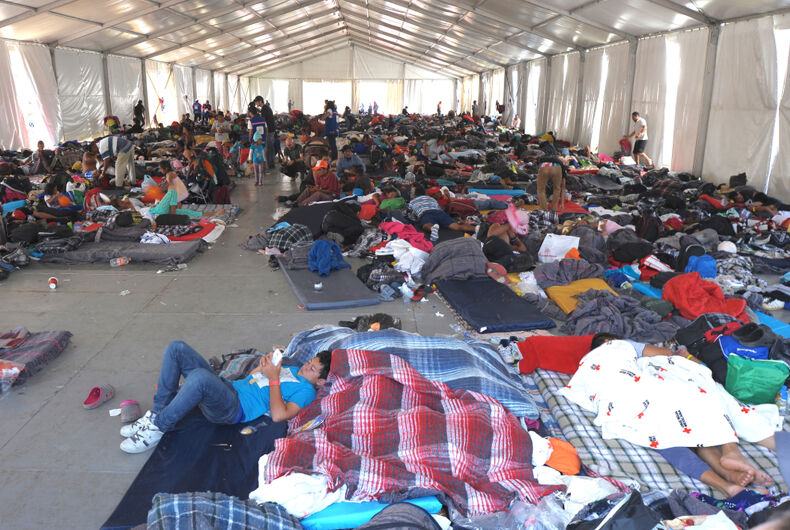 November 2, 2018: A shelter for the migrant caravan of Central Americans heading to the United States set up in Mexico City offers less than ideal conditions.Photo: Shutterstock

A group of LGBT migrants, out of the 3,600 Central Americans to reach the US border, have faced larger hurdles than other migrants.

According to NPR a large portion of the LGBT travelers, about 80 of the 120 LGBTQ asylum seekers, splintered off from the larger group in Mexico City. They did this after sustaining weeks of prejudicial treatment by locals and other migrants.

At a news conference with Frontera.info, Cesar Mejia told reporters, “”Whenever we arrived at a stopping point the LGBT community was the last to be taken into account in every way. So, our goal was to change that and say, ‘This time we are going to be first’.”

“There was no physical abuse but there was plenty of verbal abuse,” a transgender woman told reporters.

Erick Dubon, 23, from Honduras told the Washington Post, “People wouldn’t let us into trucks, they made us get in the back of the line for showers, they would call us ugly names.”

Related: 14 couples from the migrant caravan just got married in Mexico

As is the case with transgender people in most countries, trans folks from the caravan are struggling even more than the cisgender portion of the community. It’s been a challenge for them to find sponsors in the United States.

The demand to get transgender people out of detention and into the homes of a sponsor has been urgent especially since the death of Roxsana Hernández Rodriguez. Roxsana traveled with the caravan and died in ICE custody after seeking asylum.

An autopsy released outside of ICE found that Hernández appeared to have been physically abused before she died of severe dehydration due to complications from HIV.

According to Buzzfeed, Vixie, a transgender woman who was in the custody of ICE in the US, was denied her HIV medication for 22 days in detention, leaving her ill and depressed.

There is no telling exactly when or how the LGBT migrants will make it into the U.S. All of them have strong cases for asylum.

The rules and regulations to become a sponsor are strict. On top of the tough policies, taking care of a stranger financially and emotionally is a tall order.