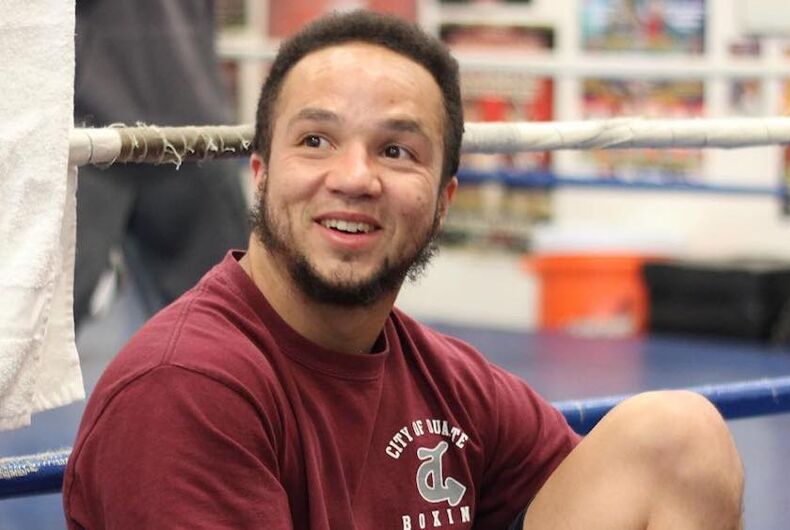 He won by a unanimous decision after a 12-minute bout. Though he failed to knock out his opponent, the judges all scored the match in Manuel’s favor.

"It's a funny thing when just living your truth becomes historic."

Manuel’s backstory is inspiring. Raised as a tomboy, he began boxing in high school as a way to lose weight. In 2012, he boxed in the Olympic trials as a woman, but had to quit due to a shoulder injury. Three months later, he began his transition.

When he informed his mother of his transition, she supported him. “I told him I would support him 100% in whatever he chose to do,” Manuel’s mother told The Los Angeles Times. “The bottom line is it doesn’t matter to me. I just want him to be happy. It was a natural transition.”

Manuel soon began hormone replacement therapy and underwent a chest surgery. But after he began transitioning, his original coach and training facility refused to work with him any longer. Three opponents refused to fight him after learning of his trans identity.

I’m so grateful to everyone on #TeamPeanut who’s coming to support me in the stands: over 60 of you! For those who can’t make it in person, tune in Saturday 6pm PST at: www.Facebook.com/GoldenBoyFN Thank you for being in my corner as I make history! #LetPatFight

Eventually, Manuel turned to the company of professional Olympic boxer Oscar De La Hoya, to get licensed as a professional fighter and find an opponent willing to face him.

When informed about Manuel’s trans identity, Aguilar said, “For me it’s very respectable. It doesn’t change anything for me. In the ring, he wants to win and I want to win too.”

Manuel isn’t the only openly trans pro-fighter. Mixed martial arts fighter Fallon Fox came out as trans in 2013, and won five of six professional bouts during her career.

Here’s a 2017 HBO interview with Manuel.