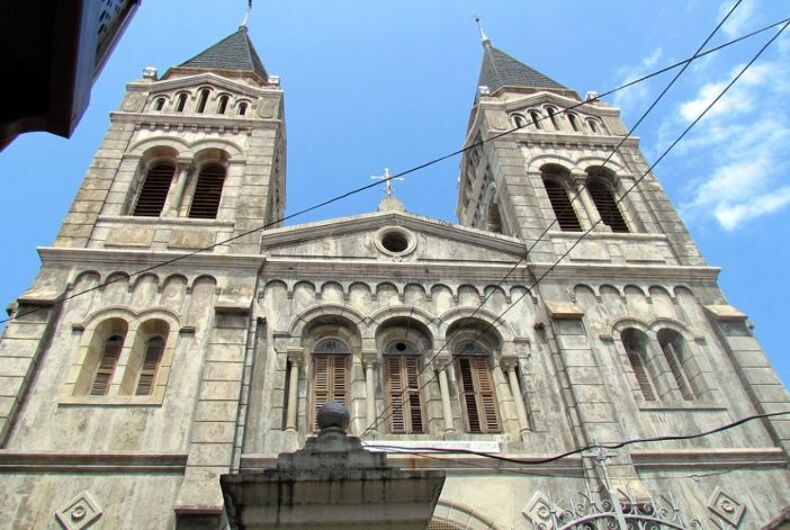 Ten men have been arrested on the Tanzanian island of Zanzibar for being gay.

An anonymous caller told the police that there was a same-sex marriage taking place on Pongwe Beach this past Saturday.

When police showed up, Amnesty International reports, six men fled but ten were arrested. They are being held in prison with no charges filed against them.

Two of the men, police say, conducted the marriage. The others were sitting “two by two,” according to the police.

“It is mind-boggling that the mere act of sitting in a pair can assume criminal proportions. The police clearly have no grounds to file charges against these men in court, despite arresting them three days ago,” said Seif Magango, Amnesty International’s Deputy Director for East Africa, the Horn, and the Great Lakes.

Last week, the regional director of Tanzania’s economic capital Dar es Salaam, Paul Makonda, told reporters that he wants people to report anyone they suspect of being gay.

“Give me their names,” he said. “My ad hoc team will begin to get their hands on them next Monday.”

Makonda warned citizens that he was setting up a task force to scour the internet for evidence of homosexuality, prostitution, and fraud. He told people to delete their “sex pictures” or face arrest.

The national government distanced itself from Makonda. The Foreign Ministry said that his words were his “personal opinion,” but the government has done nothing to stop Makonda.

The arrests this weekend are “a shocking blow following the Tanzanian government’s assurance that no one would be targeted and arrested because of their actual or perceived sexual orientation and gender identity,” said Magango.

“This appalling attack on Tanzanian people simply exercising their human rights shows the danger of inflammatory and discriminatory rhetoric at senior levels of government.”

Sex between men is illegal in Tanzania and carries a maximum penalty of life in prison. Police in Dar es Salaam have been arresting gay men in sweeps of nightclubs for several years.