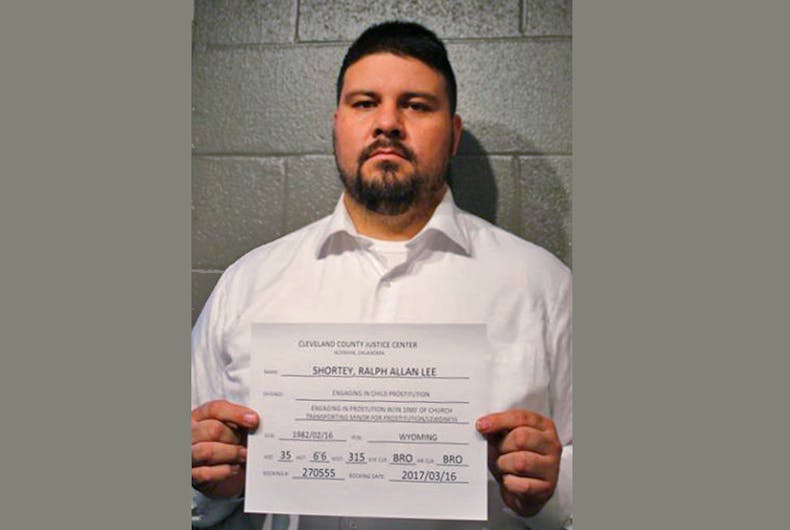 A Republican politician who was caught with an underage sex worker just got sentenced to 15 years in prison.

In March of 2017, Oklahoma State Senator Ralph Shortey was arrested after he was found in a hotel room with a teenage boy. Text messages showed that he promised the teen “money for spring break” in exchange for “sex stuff.”

Shortey, who had served two terms as a state senator, had already made national headlines in 2012 when he proposed a bill to ban the consumption of aborted fetuses as food.

While there was no evidence of this practice, Shortey said that food producers won’t “admit to it because it’s a public-relations nightmare.”

He resigned the state senate almost immediately after being arrested last year. In November, he pleaded guilty to child sex trafficking so that prosecutors would drop three charges of child pornography against him.

Shortey was sentenced yesterday after a hearing in which he apologized to consitutients and “fellow Christians.”

“I have destroyed my family,” he said.

“By leading a double life, I’ve sinned for the past few years.”

His attorney Ed Blau called a witness who said that Shortey was abused as a child.

Prosecutors, who asked for Shortey to get 25 years in prison, said that the victim was left “paranoid” by the crime.

“He feels like an outcast, like he doesn’t even belong with his own family,” the U.S. attorney said.

“It’s a tragedy of your own making, but tragic none the less,” the judge said.

Shortey will also have to pay restitution to the victim. The amount has not yet been determined.