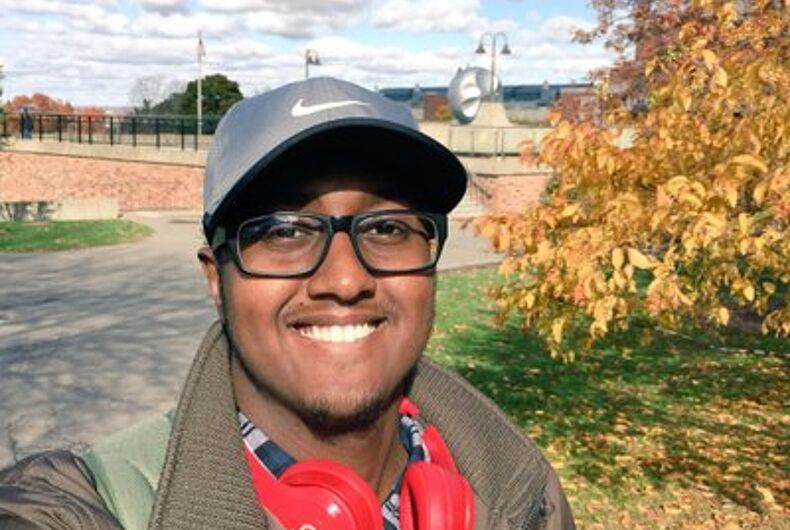 The Colin Higgins Foundation’s annual Youth Courage Award has gone to a gay student who was forced to flee Kenya after his family tried to send him to a gay conversion camp. He was awarded $10,000.

Mahad Olad’s family brought him to Kenya in 2007 under the pretense of “summer vacation,” but what happened next was not in Olad’s plans. His mother told him that it was not actually a vacation, but an intervention. The family was sending Olad to a gay conversion camp.

Even though he had kept his sexuality a secret, the family had somehow found out and he said he felt “horrified.”

Next, Olad’s mother asked him to withdraw from college in New York so that he could be guided by a group of sheiks in an effort to “reorient” his sexuality and offer him a chance to reform.

As a writer for the Ithacan, Olad wrote: “Similar to the practice of gay conversion therapy in the United States, there are those within the Muslim community who utilize abusive tactics as a way of policing what they consider to be ‘deviant’ behavior. Even though my mother ‘asked’ me to go, I knew that it wasn’t really a choice.”

He added that “a few sheiks were at our hotel that night. They briefly spoke to me about how being gay and atheist is unequivocally against my Islamic upbringing and African heritage. I knew that when they came back to get me the following morning, I would be forced to go with them.

Gay conversion camps that operate in Kenya and Somalia are known for “severe beatings, shackling, food deprivation, and other cruel practices” of their captives.

“Those who fail to cooperate, make adequate progress or try to escape could possibly be killed,” Olad shared.

Olad saw an escape route from his potential fate and took it. He called the Ex-Muslims of North America who helped him get out of Kenya and back to the U.S. He hasn’t been in touch with his family members since his escape.

“Their rejection and treatment of me has been devastating,” Olad said. “It has left me seriously questioning who I am and whether I deserve to be treated this way. The loss of my family’s love and support, both financial and emotional, has been extremely traumatic.”

Olad added that “while I’m lucky to have close friends who have offered comfort, it does nothing for the hole my family ripped into my heart. I know what they did to me was horrible and wrong, but they are still my family and reconciling with them will take some time.”

Why Obama is better than Trump, from A to Z