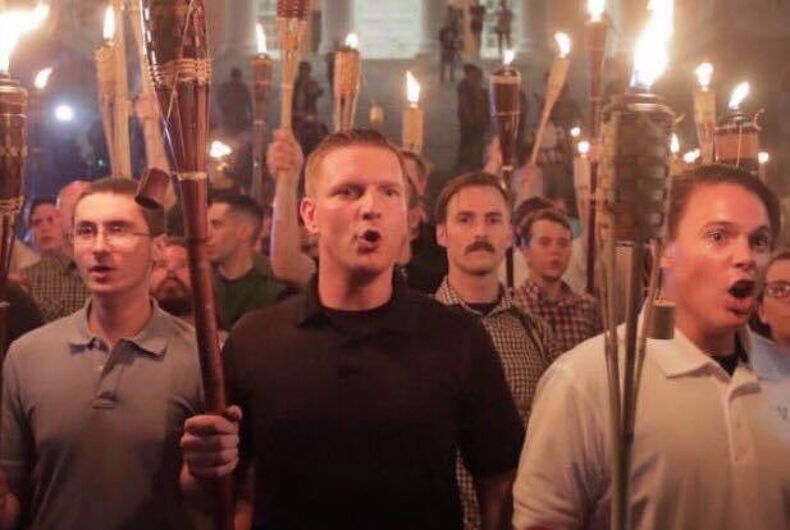 An estimated 1,500 white supremacist neo-Nazis marched on Charlottesville, Virginia for their “Unite the Right” rally last August, carrying Confederate flags and Nazi symbols in protest of the town’s proposal to remove the statue of Confederate General Robert E. Lee.

The rally resulted in extreme violence and the murder of a young woman by a white supremacist and the death of two state police officers. This weekend, the neo-Nazis and white supremacists will march again; this time through the streets of Washington, DC, where they’ll rally in Lafayette Square across from the White House.

In 1979, the ACLU took up and won the cause of defending the right of a neo-Nazi group to march legally through the streets of Skokie, Illinois, a suburb of Chicago with many Holocaust survivors in residence. A compromise agreed upon in the court changed the venue from Skokie to Federal Plaza in Downtown Chicago.

White supremacy is based on a racist ideology that white people (European-heritage) people are superior on several levels to other so-called “races.” The current generation follows a long legacy from their predecessors in the United States and abroad.

Carl Linnaeus (1707-1778), Swedish botanist and physician invented the modern system of scientific hierarchical classification. He has also been called the “Father of Scientific Racism.”

Voltaire, 18th century French Enlightenment philosopher was a polygenist (human “races” are from different origins—different Adams and Eves). He asserted: “The Negro race is a species of men different from ours as the breed of spaniels is from that of greyhounds.”

Sir Francis Galton (1822-1911), founder of the “Eugenics Movement” and someone who profited greatly from the slave trade, stated, “I do not join in the belief that the African is our equal in brain or in heart; I do not think that the average negro cares for his liberty as much as an Englishman, or as a self-born Russian; and I believe that if we can in any fair way, possess ourselves of his services, we have an equal right to utilize them to our advantages.”

The modern-day Eugenicist, William Shockley, asserted that black Americans suffered from “dysgenesis,” or “retrogression evolution.” He proposed eliminating the public welfare system to be replaced with a “Voluntary Sterilization Bonus Plan.”

The highly-charged racist stereotype of black men as oversexed and sexually-insatiable predators of white women and girls persists today, as does the myth that black men are more highly endowed genitally than their white counterparts.

Throughout the history of the United States, vicious white gangs have beat and lynched black men and boys on charges, bogus or not, of even looking at white women or girls.

White vigilantes killed black residents and burned down the town of Rosewood, Florida on the false charge by a white woman that a black man had raped her. A band of white men in Mississippi viciously tortured and lynched Emmett Till, a 14-year-old black teenager, for allegedly flirting with a white woman.

But questions need asking: How do we define “hate speech.” And does the First Amendment of the U.S. Constitution protect the right of hate groups to speak and publish their ideas, to assemble, and “to petition the Government for a redress of grievances.”

In some countries without a First Amendment-equivalent, the answer is “No, they have no such rights.”

In Britain, for example, though people have a general right to speak freely and associate with whom they wish, these rights exist in lesser degrees through common law and legislation than in the United States.

A responsibility in common law is to protect “the Queen’s peace” and to arrest anyone who transgresses. In addition, Public Order Act 1936 passed by Parliament in the 1930s forbids wearing “political uniforms” at public meetings when they represent a political object. This law was enacted to control extremist movements, such as Fascists.

With our Constitutional First Amendment guarantees, unless the judiciary develops clear and consistent demarcation lines between “free speech” and “hate speech,” Neo-Nazis had a right to speak in Chicago and have the right now in Charlottesville.

We may never place a demarcation line between “free speech” and “hate speech” due to the enormity in constructing the boundaries. We certainly don’t have to support disgusting rhetoric and ideas, but people and groups have the right to speak. We and they also have the right to peacefully protest.

The current controversy around Alex Jones, who manufactures and transmits vile and damaging conspiracy theories through his InfoWars platform, again centers public attention on potential legislative actions to define the parameters of “free speech.”

As a queer person and as a Jew whose Polish family the Nazis murdered during the Holocaust, I am acutely aware of the long history of the many means dominant groups have employed to silence us.

They have killed us, attempted to convert us, expelled us from countries and institutions, banned and burned our literature, deleted or distorted our histories, and denied us the ability to raise our children and to raise our voices.

But while the organizing committee for Boston’s Saint Patrick’s Day parade banned various LGBT groups over the years, should the organizers of Charlotte, North Carolina’s Pride parade have denied a group of Trump supporters a float permit, and should parade celebrants have shouted down group members when they attempted to speak on the street during the parade?

Should the administration of the University of California at Berkeley have cancelled Milo Yiannopoulos and Ann Coulter’s planned addresses? And while most students engaged in legally-protected peaceful protests, was it appropriate for some protestors to contribute to violence in opposing the appearance of these controversial speakers?

After all, Berkeley was the university serving as the epicenter of the “Free Speech Movement” during the early 1960s.

We must also ask ourselves, if not on a university campus than where can we engage in controversial topics and ensure the rights of others all along the spectrum to pose their ideas?

Are we really understanding the warning in Audre Lorde’s words? “The master’s tools will never dismantle the master’s house.”