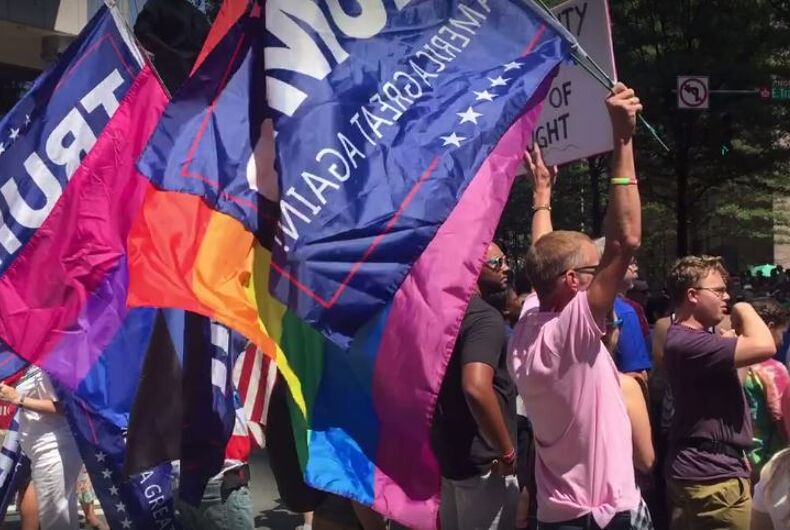 Deplorable Pride protests the Charlotte Pride parade after their attempts to get a float were blocked.

Charlotte Pride denied a group of gay Donald Trump supporters, calling themselves Deplorable Pride, a float in this year’s parade. They did not take it well, and planned a protest in response.

On Sunday, Deplorable Pride did, in fact, show up, with a group of less than a dozen protesters, carrying signs with messages like, “Banning Voices is Un-American” and “True Diversity Includes Diversity of Thought.”

Related: These LGBT Trump supporters are standing by their man

Organizer and head of Deplorable Pride, Brian Talbert, shouted out statements like, “I told you you would hear my voice,” and “Are you proud that we actually exclude our own people?”

Charlotte Pride defended its decision, saying it “has the right to exclude any group it feels does not reflect the parade’s values of welcoming groups on the fringes of American society, including undocumented immigrants.”

“I’m living proof that they do not stand for the inclusion of all gay people,” Talbert told the local Fox affiliate. “Just for a political belief, I’m excluded and my group is excluded. So they’re hypocrites.”

“[They] claim to be the party of inclusion and diversity, when they’re not allowing people to have a diversity of thought,” added another protester.

Deplorable Pride was not the only group protesting. There were, as always, a small contingent of anti-LGBTQ street preachers.

Drag queens from The Sisters of Perpetual Indulgence had an ingenious way of drowning out their hate, clapping back with fans.