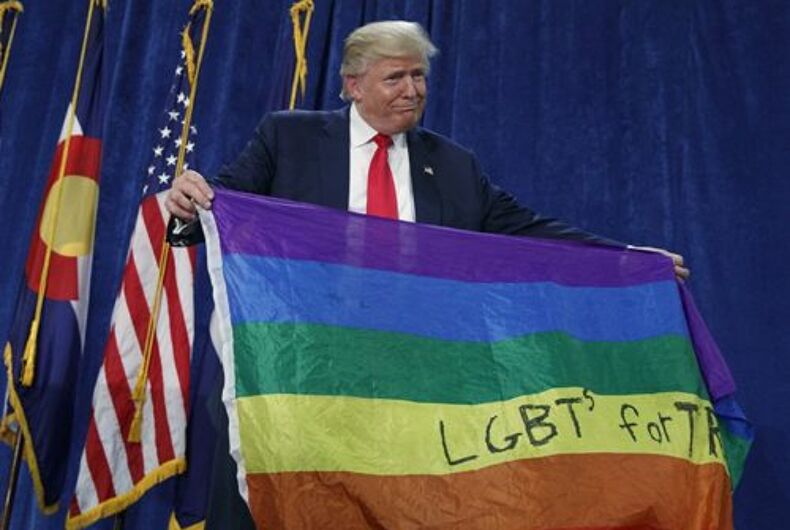 The White House has taken notice of a gays for Trump group getting banned from participating in the Charlotte Pride parade coming up in August.

Brian Talbert, co-founder of the group, called Deplorable Pride, characterized the call as partly a show of support.

Talbert said the float was not intended to be anti-LGBTQ, but instead to celebrate Trump as president. The float would have included a Melania Trump impersonator, as well as women dressed in “Make America Great Again” evening gowns.

“They asked me to email them everything I could on what happened,” Talbert said. “I was told: ‘The president is going to want to see this.’”

“It definitely re-affirmed what I thought about the type of man he is,” he added.

Talbert is clearly enjoying all of the attention he has garnered, which includes a good deal of national press.

“It’s easy for me to expose the gay left,” Talbert told The Stanly News and Press. “The repressed has become the repressor. I’m enjoying every minute of it.”

Talbert said that the call was also prompted by his participation in a sit-in at a Starbucks on Saturday, after a customer in a Trump t-shirt was reportedly mocked by staff. Starbucks has since issued an apology.

He went on to call Trump the most as the most supportive of gay rights of any sitting U.S. president, a demonstrably false claim.

Already Trump has shown his anti-LGBTQ colors, by proposing massive cuts to HIV/AIDS spending, and heading up an administration that is systematically cutting the legs out from under civil rights efforts across the entire federal government.

The Trump administration also rescinded an Obama-era directive instructing public schools to respect the gender identity of students concerning the use of bathroom and locker room facilities.

He has also appointed so many anti-LGBTQ advisers during the campaign, a practice that has continued into his Cabinet, that it cost him an endorsement from the Log Cabin Republicans. That said, they have been more supportive since.

Talbert reports that he has received death threats over the parade situation, but said he is not deterred.

“You are not going to stop hearing from Deplorable Pride,” he promised.