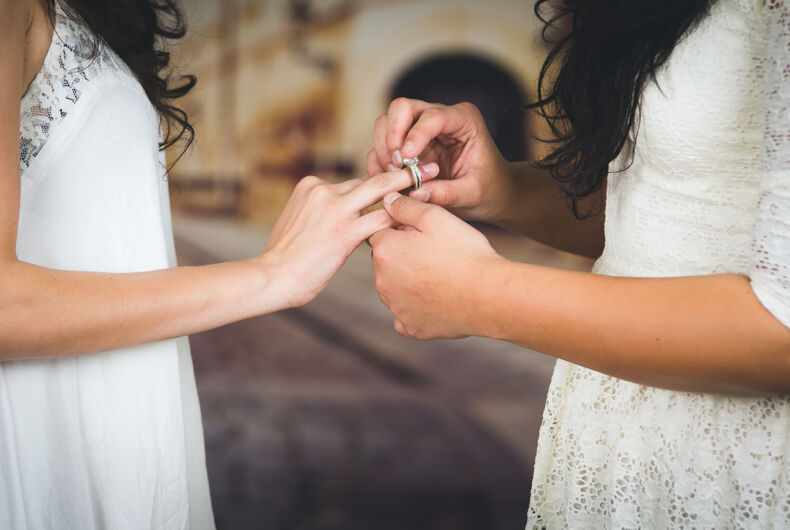 It’s been two years since the U.S. Supreme Court ruled in favor of marriage equality, but couples say they still face discrimination when planning their weddings.

According to a recent study from The Knot and Q.Digital (the parent company of LGBTQ Nation), nearly a third of female couples (30%) and 11% of male couples said they were rejected by wedding vendors or left feeling uncomfortable due to their LGBTQ identity.

And while proponents of so-called “religious freedom” laws often argue that LGBTQ couples should just seek out businesses who want to serve them, it’s not always that easy. Not all vendors make clear whether or not they are LGBTQ-friendly, and same-sex couples would like to see that change.

Most respondents (88% of men and 91% of women) said vendors should clearly communicate that they are LGBTQ friendly and an even larger majority (91% of men and 92% of women) said they’d be more likely to book a vendor that’s not only friendly, but actively caters to the LGBTQ community.

Same-sex couples may share a need for florists, bakers, and other wedding professionals, but the details of their ceremonies often break with traditions built around heterosexual pairings.

“Today’s couples want a personalized celebration that reflects their unique style and personalities together,” said Kellie Gould, editor-in-chief of The Knot. “To-be-weds are opting for mixed-gender wedding parties, personalized processionals, and unique twists to long-standing traditions. These trends are in no way exclusive to same-sex couples, but are growing in popularity with this community.”

Other convention-busting practices include mutual proposals, dressing together on wedding day, walking down the aisle together, and eschewing the traditional Wagner’s Bridal Chorus (“Here comes the bride…”).

Same-sex couples were also fond of themes (41% of women, 32% of men) and signature cocktail (29% of men, 25% of women), one increasingly common calling card of same-sex weddings is including a quote from the Obergefell v. Hodges majority opinion by Supreme Court Justice Anthony Kennedy:

No union is more profound than marriage, for it embodies the highest ideals of love, fidelity, devotion, sacrifice, and family. In forming a marital union, two people become something greater than once they were. As some of the petitioners in these cases demonstrate, marriage embodies a love that may endure even past death. It would misunderstand these men and women to say they disrespect the idea of marriage. Their plea is that they do respect it, respect it so deeply that they seek to find its fulfillment for themselves. Their hope is not to be condemned to live in loneliness, excluded from one of civilization’s oldest institutions. They ask for equal dignity in the eyes of the law. The Constitution grants them that right.”

Other highlights from the study include: