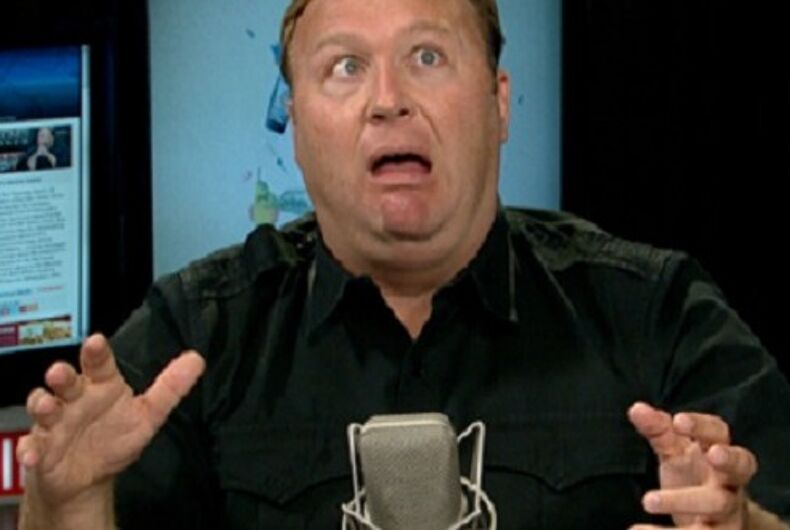 Infowars, the radio show and website run by Alex Jones, said that they got notice yesterday from YouTube that they were “one strike” away from being banned.

The notice came after a video about the Parkland shooting was removed from the site.

YouTube said that it updated its policies on bullying and harassment last summer to include “hoax videos that target the victims of these tragedies.” The second strike on an account bans the owner from uploading new videos for two weeks. The third strike closes the account.

Infowars got its first strike last week for a video that said that David Hogg and other student survivors of the Parkland shooting were actors. The video was titled, “David Hogg Can’t Remember His Lines In TV Interview.”

It wasn’t the first time that Jones said the shooting survivors were actors.

In a February 15 video, Jones said that he would “officially say that it’s about a 90 percent chance” that the school shooting was a “deep state false flag operation.” And Jones gained notoriety in 2014 when he claimed that the Sandy Hook shooting, in which twenty elementary school children were killed, was staged by the government and that “no one died.”

Related: Here’s what conservatives are blaming for the latest school shooting instead of guns

Jerome Corsi is a regular on Infowars and earned the title of “Birther King” for his work on the conspiracy theory that Barack Obama wasn’t born where his birth certificate says he was born. He also claimed in a book that Adolf Hitler escaped Germany with the help of the CIA, and has written that Rev. Jeremiah Wright helped Obama stay in the closet.

The video has been deleted, so we don’t know exactly what was in it. But Corsi has more recently been pushing the “The Storm” conspiracy theory – that Donald Trump is being targeted by the “deep state” for removal. “The Storm” comes from cryptic messages left by a user called “Q” on 4chan who claims to be a “high-level government insider,” and Corsi claims he can “decode” Q’s messages.

In other words, it’s an insane conspiracy theory and YouTube has decided they want no part in promoting it.

That’s not how Jones sees it, who called the strikes “an unprecedented attack on free speech” masterminded by CNN.

CNN and other news outlets have continued to exert lobbying pressure on Google/YouTube to terminate https://t.co/q3XYgIaAit’s entire channel – https://t.co/ZQSEBtM0Mb

In the article, Jones attacks CNN because they reported about his first strike and asked YouTube why other Infowars videos – which also contain conspiracy theories – have not been removed.

He also somehow included Jewish Democratic donor George Soros in this conspiracy, saying that Soros is promoting net neutrality, which Jones said would allow “Internet content giants including Google/YouTube, Facebook, and Twitter” to “censor out conservative and libertarian views with impunity.”

While he might appear completely unhinged, Jones’s conspiracy theories usually advance conservative policy goals. Mass shootings, especially school shootings, are pretty convincing reasons why the government should do more to regulate guns. So saying that these shooting aren’t happening helps his listeners tell themselves that they’re not lobbying for the death of children.

Donald Trump is a fan of Infowars. In a 2015 interview, Trump told Jones that he had an “amazing reputation.”

“I won’t let you down,” Trump promised Jones.

This teen disappeared after a Grindr hook-up. His body was found 9 days later.