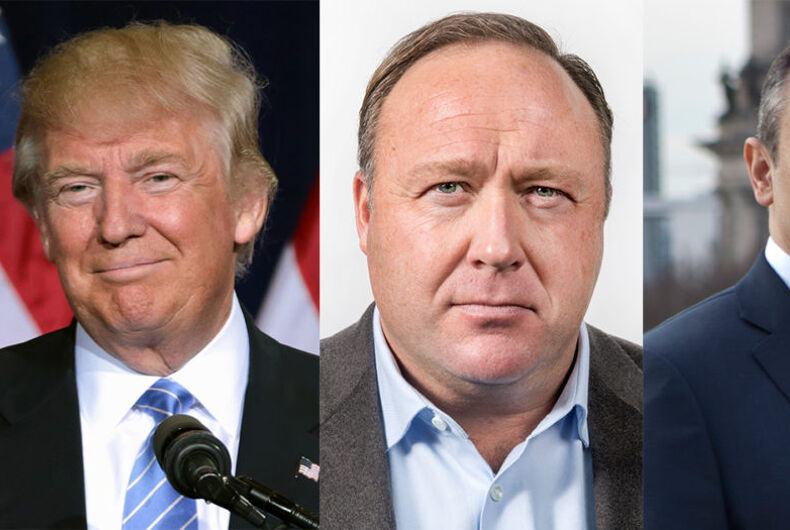 Students from Stoneman Douglas High School are traveling to Florida’s capital today to urge lawmakers to take action on gun control, after one of their former classmates killed 17 students and faculty last week.

Republicans, on the other hand, are slower to put the blame on easy access to guns, lest they land on the wrong side of the voters in their gerrymandered districts, or cut themselves off from the donations pouring in from the National Rifle Association (NRA).

Here’s who, and what, they are willing to blame in the wake of the Florida school shooting in order to keep the pressure off guns:

President Trump has put at least some of the blame at the feet of the very community that is struggling to recover, including the victims and their families, saying “neighbors and classmates knew he was a big problem. Must always report such instances to authorities, again and again!”

So many signs that the Florida shooter was mentally disturbed, even expelled from school for bad and erratic behavior. Neighbors and classmates knew he was a big problem. Must always report such instances to authorities, again and again!

While Trump seems to think enough wasn’t done by the community to report suspected shooter Nikolas Cruz, he was, in fact, reported to law enforcement due to his unusual and disconcerting behavior.

Democrats/”Leftists” (Possibly Staging it as a False Flag Event)

Just like they don’t want to solve the DACA problem, why didn’t the Democrats pass gun control legislation when they had both the House & Senate during the Obama Administration. Because they didn’t want to, and now they just talk!

Alex Jones is blaming Democrats, suggesting that the shooting could be a false flag event that never really happened, in order to get gun control passed. Jones, and others from his outlet InfoWars, made similar claims about Sandy Hook.

“And who what mentally-ill person they’ve wound up or what’s happening or was this gang related? We don’t know. The media will say that I said it’s a false flag and the Democrats did it. I did not say that. We’re simply questioning the long history that these folks have.”

He stepped up the rhetoric one day later, Media Matters reports.

“Wow, we said the perfect false flag would be a white nationalist attacking a multicultural school as a way to make the leftists all look like victims and bring in gun control and a war on America’s recovery and now right on time what we’ve been warning of, their main card, the thing we said was imminent, appears with all the evidence,” he said.

InfoWars has now sent fellow false flag conspiracy theory pusher, and self-proclaimed “investigative journalist,” Laura Loomer to the community, where she recently confronted Democratic Congressman Tom Deutch, who refused to submit to an interview, noting the publication’s efforts to make people disbelieve the shooting at Sandy Hook was a real event.

Pittman, commenting on a since deleted Facebook post of a picture of someone he incorrectly believed to be the shooter (a young man in a shirt with socialist leaders), also blamed the left.

“Not surprising to see the people depicted on his T-shirt. So many of these shooters turn out to be communist democrats, that I suspect they are doing these things to push for gun control so they can more easily take over the country,” he wrote.

End times pastor Carl Gallups, who delivered the invocation at a Donald Trump campaign rally in 2016 in Pensacola, Florida, puts the blame on demonic spirits from hell.

“This has it’s origins in the spiritual realms,” he said, while on TheDove TV’s “Focus Today” program, reports RightWingWatch. “There is a concerted demonic attempt to undermine the United States of America, to bring it down, to destroy the most precious among us. Why is that such a demonic attempt? Because we know the scriptures say that there will arise a generation that will see this Antichrist system, this one-world order…The bottom line is we are headed that way.”

“The United States is the largest Christian nation the planet has ever seen,” Gallups added. “It’s the number one military superpower, it’s the number one economic superpower and so there is a demonic attempt to destroy it, to bring it down, to break the culture into some kind of submission.”

“One of those ways is to take away our ability to defend ourselves, so every time something like this happens, the leftists start screaming—you can almost hear it from the pits of hell—’Take away all the guns, take away all the guns.’ That’s not the solution and we all know it’s not and we know why, but we hear that. So, this is very spiritual, it’s very deep, it’s very dark.”

The FBI received a tip about Cruz, warning that he had access to guns and seemed to have an obsession with violence, but it was never forwarded for investigation.

While the lapse is being roundly criticized from all corners. But Republicans have seized on it as “proof” that the investigation into the Trump campaign’s possible ties to Russian efforts to undermine the 2016 presidential election is preventing the FBI from handling other issues, like looking into potential school shooters.

President Trump himself made this argument through his favorite medium, Twitter.

Very sad that the FBI missed all of the many signals sent out by the Florida school shooter. This is not acceptable. They are spending too much time trying to prove Russian collusion with the Trump campaign – there is no collusion. Get back to the basics and make us all proud!

Fox’s Tucker Carlson also implied that the FBI might have stopped the shooting had they not been investigating Trump and Russia, in spite of the fact that the agency is always tasked with investigating a multitude of crimes, and potential crimes or threats, at all times.

“At least we know what our federal agents had been doing recently, why they were too busy to stop school shootings — they’d been chasing down bad Facebook trolls,” Carlson said on Friday, after attempting to downplay the legitimacy of the Trump, Russia investigation.

“Today, the FBI admitted it was given explicit warning that Nikolas Cruz could be planning a massacre but they never even followed up on that. If only someone had told them Cruz was talking to Vladimir Putin, they would have been on it, presumably.”

The solution to too many guns? Simple, more guns!

Since this shooting happened at a school, the Republican brain trust is pushing the idea of arming teachers.

Former House Speaker Newt Gingrich appeared on Fox to argue that it is “the only long-term solution.” A North Carolina lawmaker, Rep. Larry Pittman, also backed the idea, saying he recently met with a police officer who wants to speak with lawmakers about arming teachers and other staff in schools.

Education Secretary Betsy DeVos said during an interview with radio host Hugh Hewitt that states “clearly have the opportunity and the option.”

Currently, only law enforcement is allowed to carry guns on school property in Florida. A bill attempting to change that is starting to see new life in the wake of the shooting.

If you think this will never happen, there’s already precedent. NBC reviewed the laws in 2012, after the shooting at the Sandy Hook Elementary School, and found that 18 states allow adults to have a loaded gun on school grounds, usually provided they have been given written permission. CBS recently ran a report on the issue as well, showing the trend continuing.

Another favorite talking point of those who wish to blame anything and everything but guns for gun violence: Fake violence is the real problem.

Violent movies, video games, and music are quickly blamed for inspiring people to act out what they see and hear represented in media, as opposed to look at as a reflection of the society we are already steeped in. Which is to say one obsessed with guns, death, violence, and control.

Gov. Matt Bevin, in Kentucky, is one such Republican spouting this line.

“We need to have an honest conversation as to what should and should not be allowed in the United States as it relates to the things being put in the hands of our young people,” he told the Cincinnati Enquirer, and, no, of course he doesn’t mean deadly firearms.

“I’m a big believer in the First Amendment and right to free speech, but there are certain things that are so graphic as it relates to violence, and things that are so pornographic on a whole another front that we allow to pass under the guise of free speech, which arguably are,” he continued. “But there is zero redemptive value. There is zero upside to any of this being in the public domain, let alone in the minds and hands and homes of our young people.”

RightWingWatch reports that Jim Garlow, the Senior Pastor of Skyline Church located in La Mesa, California, went after the ACLU in a since deleted Facebook post.

It quotes Garlow as claiming the ACLU has “‘innocent blood on their hands,’ having stripped Judeo-Christian values from our nation’s classrooms.”

Meanwhile, in case you were wondering, the American people aren’t buying it.

According to a Washington Post/ABC News poll, the majority of Americans blame Trump and Congress for not doing enough to prevent mass shootings.

Not that it will keep conservatives from making these same talking points when the next inevitable mass shooting occurs, probably sooner than later. Because the only thing more predictable than the talking points around gun violence is the growing body count.