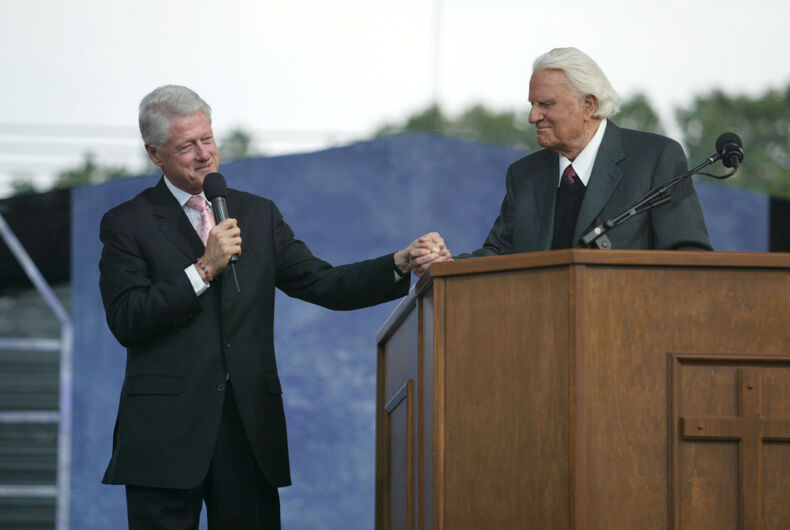 Evangelist Billy Graham, one of America’s best loved preachers, has died at the age of 99. The popular minister was nicknamed “America’s Pope” due to his devoted followers, scandal-free life, and compassion for everyone.

Franklin Graham, who succeeded his father as the leader of the Billy Graham Evangelistic Association, couldn’t be further removed from his dad’s legacy. The younger Graham has turned Christianity into a weapon to wielded against people of color, the poor, and LGBT people; he is one of President Donald Trump’s most vociferous supporters.

Related: England may ban Franklin Graham from the country for his anti-gay hate speech

Billy Graham, however, was known for his inclusivity during the civil rights struggles of the 1960s. He preached that segregation was unbiblical and would remove any ropes separating white and black audiences at his crusades.

Graham asked Martin Luther King Jr. to deliver a prayer during his Madison Square Garden crusade and took his supporters to task for not standing up for civil rights in the aftermath of the bombing of a church in Birmingham, Alabama in 1963.

“We should have been leading the way to racial justice but we failed. Let’s confess it, let’s admit it, and let’s do something about it,” Graham said at the time.

Graham was also regularly criticized for his inclusion of Catholic or liberal Protestant ministers in his crusades.

He served as the spiritual advisor to multiple Presidents and, while accused of dabbling too much in politics, generally served as a moderate voice for peace and tolerance. Franklin Graham, now an informal advisor to President Trump, has advocated for discrimination against LGBT people, excused Trump’s sexual misconduct, and regularly attacks Muslims and “non-believers.”

When it comes to modern evangelicals, Billy Graham wouldn’t recognize the movement he built on love and peace as it has embraced discrimination and thrown aside all moral bearings in pursuit of political power.