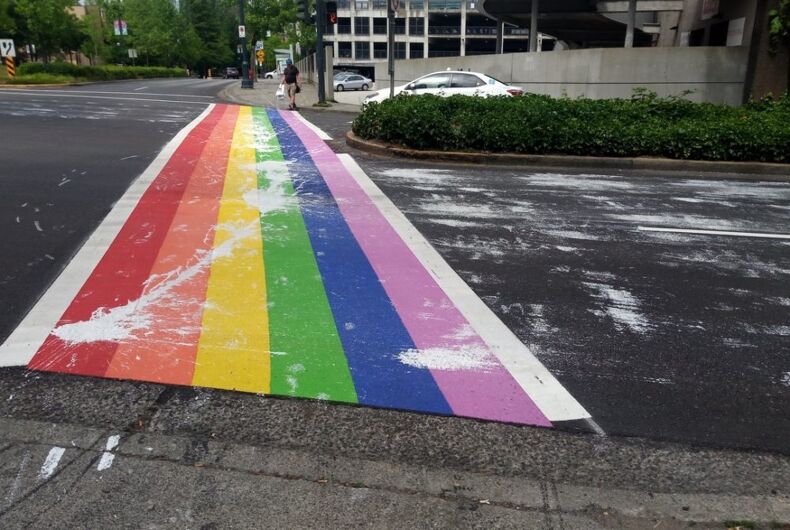 Rainbow crosswalks in two cities were vandalized with paint this past week, and two others were damaged by skidmarks this past month.

In Paris, a picture of a rainbow crosswalk covered with white paint was shared on Twitter by a local LGBTQ organization. The vandals wrote the words “LGBT HORS DE FRANCE” (LGBT Out of France) next to the vandalized crosswalk.

“HOMOPHOBE OUT OF FRANCE”

The city of Paris immediately promised to remove the graffiti.

The homophobic graffiti in the Marais will be erased this morning. We are going to repaint the crosswalks that were vandalized (and we are going to make some more while we’re at it). We are determined to combat homophobia.

And Anne Hidalgo, the mayor of Paris, promised to make the crosswalks permanent just hours after the graffiti was found.

Paris is a city of refuge that supports the republican values of liberty, equality, and fraternity. In order to inscribe them forever on these walls, the rainbow crosswalks created for Pride will be made permanent!

In Surrey, British Columbia, a rainbow crosswalk was also targeted by vandals. They poured white paint in a line that followed the crosswalk this past weekend.

“I think it’s very disappointing someone would do this,” said Ginger Gervais, who posted an image of the vandalism on Twitter.

On Monday morning, a clean-up crew was able to remove the graffiti with high-pressure water.

The mayor of Surrey, Mayor Linda Hepner, “condemns this bigoted act, but is not interested in giving the perpetrators any sort of publicity,” a spokesperson said.

Two other rainbow crosswalks were vandalized with black skidmarks this month in Canada.

In Whitehorse, Yukon, a rainbow crosswalk was vandalized when a white truck stopped on it two weeks ago and then sped off, according to witnesses. Whitehorse Mayor Dan Curtis said he was “embarrassed” that someone in his city would do that.

The damage was repaired.

The rainbow crosswalk in #Whitehorse has been patched up after last week's vandalism pic.twitter.com/vW0icLZBw0

The same thing happened two weeks ago in Regina, Saskatchewan.

Sad that adults regress with nothing learned.

On Monday the students in the gay/straight alliance at École Harbour Landing School, painted a rainbow crosswalk for Pride, https://t.co/Umcj3toKjH pic.twitter.com/sR0FKjgPaJ

The crosswalk was painted by students at the École Harbour Landing School.