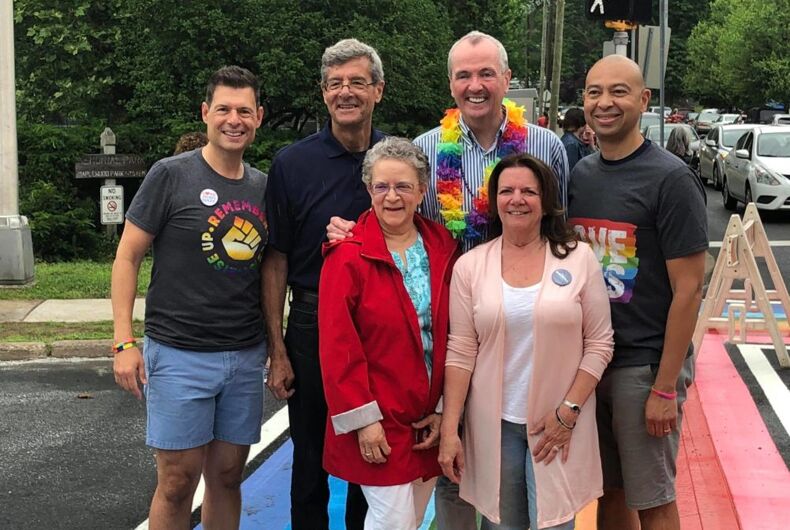 Maplewood has become the first city in New Jersey to install a rainbow crosswalk in their town — and it comes with a historical twist.

Rather than sticking with the modern pride flag’s six colors, they’ve gone back to Gilbert Baker’s original flag in all its eight-striped glory.

Their crosswalk is installed at Oakview Road and Valley Street, and was unveiled for Pride Month on the 7th of June. The crosswalk, however, is a permanent addition, not just there for Pride events.

“We want to do something that would serve as a permanent marker or symbol of our commitment to inclusion,” said Dean Dafis told NJ.com. Dafis is the first out Maplewood Township committee member.

He added, “I wanted it to be something you can encounter every day. We want our youth in particular — perhaps those struggling to find their way, those in need of empowerment and affirmation — to proudly cross or walk over their fear and self doubt.”

The pride flag as presented in Maplewood contains all eight of the original colors as designed in 1978: hot pink, red, orange, yellow, green, turquoise, blue, and violet.

Hot pink was removed early on due to difficulties getting the proper dye, while turquoise was dropped to keep the number of stripes even — and visible when hung from lampposts on Market Street in San Francisco.

Each color originally had a specific meaning, with hot pink referring to sex, and turquoise to magic and art. The others represented life, healing, sunlight, nature, serenity, and spirit, respectively.

While this is a first for New Jersey, many other locations have taken to similar crosswalks, including Key West, West Hollywood, and San Francisco. Several others are unveiling in coming weeks.

The Maplewood crosswalk was unveiled non the 7th of June in an event held on the Maplewood town Hall’s front steps. It is one of many planned pride events in Maplewood this June.