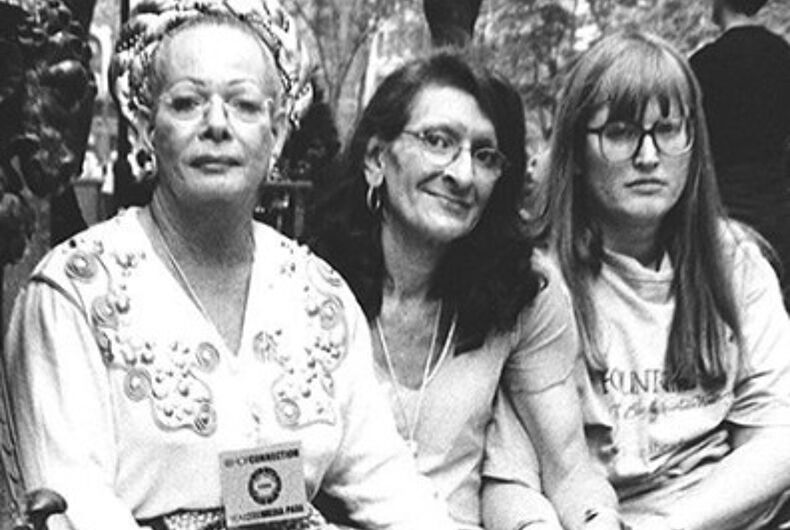 Sylvia Rivera (center), with her partner, Julia Murray (right) and Christina Hayworth (left), at the rally before the New York City Pride Parade, in 2000.

When drag queens and other angry patrons fought police harassment at New York’s Stonewall Inn, in 1969, Sylvia Rivera, a transgender woman, was a sex worker in the then-dicey Times Square district.

The riots inspired her activism, which was influenced by her experiences with poverty, homelessness and substance abuse.

After Stonewall, Rivera joined the Gay Activists Alliance and fought for the city’s non-discrimination ordinance. She was arrested for climbing the walls of City Hall in a dress and high heels to protest a closed-door meeting on the ordinance.

After GAA distanced itself from Rivera and others to project a mainstream image, Rivera joined transgender ally Marsha P. Johnson to found the Street Transvestite Action Revolution. Rivera advocated not just for LGBTQ people, but also for people of color who faced poverty and discrimination.

An active member of New York’s Metropolitan Community Church, Rivera worked with the church’s food pantry. For her long-standing commitment to youth, the church named its queer-youth shelter Sylvia’s Place.

After Rivera’s death, in 2002, Riki Wilchins, of the Gender Advocacy Coalition, described her place in LGBTQ history:

“In many ways, Sylvia was the Rosa Parks of the modern transgender movement, a term that was not even coined until two decades after Stonewall.”

These twins came out to their mom. Her reaction is so perfect they put it on YouTube.