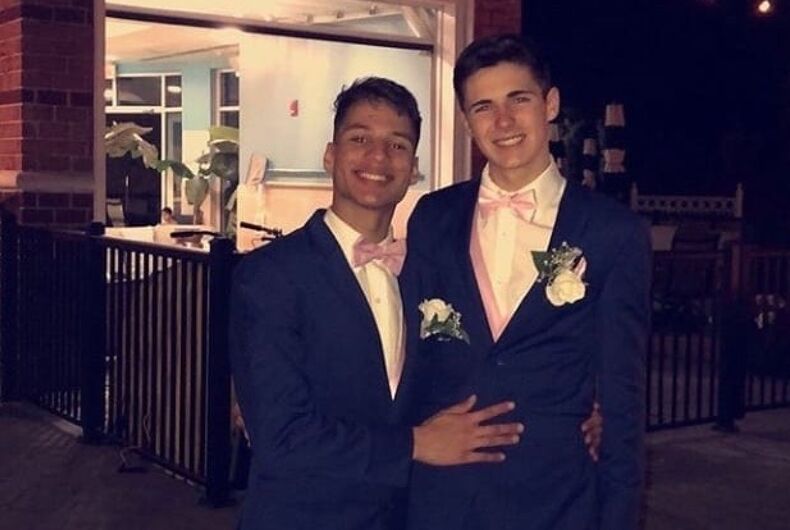 Good Morning America producer Mike Del Moro was walking the Seaside Heights, New Jersey, boardwalk with his boyfriend, mom, and sister after celebrating Mother’s Day when he saw it start.

As high school prom goers strolled by in their finest dresses and tuxedos, a group of rowdy “bros” started yelling at them from a rooftop bar.

The guys were “obnoxiously yelling ‘KISS HER!’ in unison at every apparent couple that passed by,” Del Moro recounted on Twitter.

Last night, while out for Mother’s Day with our families (read: getting some late-night ice cream because treat yourself!) we noticed a group of rowdy bros gathered on a rooftop bar obnoxiously yelling “KISS HER!” in unison at every apparent couple that passed by.

But when a young gay couple walked by in matching tuxedos and holding hands, Del Moro and his family went on high alert. After all, New Jersey bros aren’t known for their diversity of thought and gentle nature.

Still, they weren’t expecting what happened next.

I looked at Alec (my boyfriend), my mom, my sister, and stopped to make sure the couple was okay as they walked by… worried that something might happen. The rooftop crew quickly switched from “KISS HER!” To “KISS HIM!”

But when the two teens nervously smooched for the audience, the crowd. went. wild.

Still, Del Moro cautions that the East Coast is generally more accepting of LGBTQ people and that his tweets weren’t a “‘look everything’s fine now,’ thread.”

This is not a “look everything’s fine now, thread,” and yes… it’s New Jersey, but I just thought it was worth sharing and an encouraging moment for young LGBTQ folks out there.

But then… because this story just keeps getting better… Twitter found the two teens he was talking about after someone recognized one of the teens as a former classmate.

Theodore Vidal and his boyfriend, Colin Beyers, were walking back from prom together when they brought their own brand of magic to the boardwalk.

Omg… h/t to @JMiller_NJ for finding these two! Good for you being so brave and open Theodore and Colin! https://t.co/Moe0n87J6M https://t.co/oDtcsYSBXs pic.twitter.com/RidLuj3dUy

Buzzfeed caught up with the two to get their backstory and it’s just as adorable as they are.

“It’s an area where you normally would get discriminated against and the fact that those guys cheered us on was shocking,” Beyers told the outlet. “It’s one of those small victories that makes the hard times worth it.”

“It was so surprising that these guys were supporting us,” Vidal added. “Especially after what I’ve gone through.”

When Vidal came out as a freshman, he says he was regularly ridiculed and bullied in school. To help cope, he turned to music – and that’s how he met Beyers. The two played together in a symphony and after “making eyes at each other” for months, the two boys finally realized they had something special.

“My life has changed because of him,” Vidal said. “He pushes my depressed thoughts away. He’s always there and he makes everything better. He helps me live life to my fullest and that’s what I am doing right now.”

Beyer came out shortly after the two started dating and his experience was remarkably different. Still, he knows not everyone has the same reaction from family and friends.

“It always gets better, that’s what I tell myself when it’s hard,” Beyers said. “For those that are getting bulled or in a dark place and feel like it won’t stop or end, it does. Those people go away and you meet better people who love you for who you are. When I feel like I’m discriminated against I tell myself that it will get better and it does.”

“You get one chance here and you need to stand out for who you are and believe in that even when people are picking on you. Find people who love you for you and don’t try to be anyone else. You are an amazing person. Look in the mirror every day and tell yourself you look good even when you feel you don’t.”

One thing that looks good on everyone? Love. And those two are beautiful.