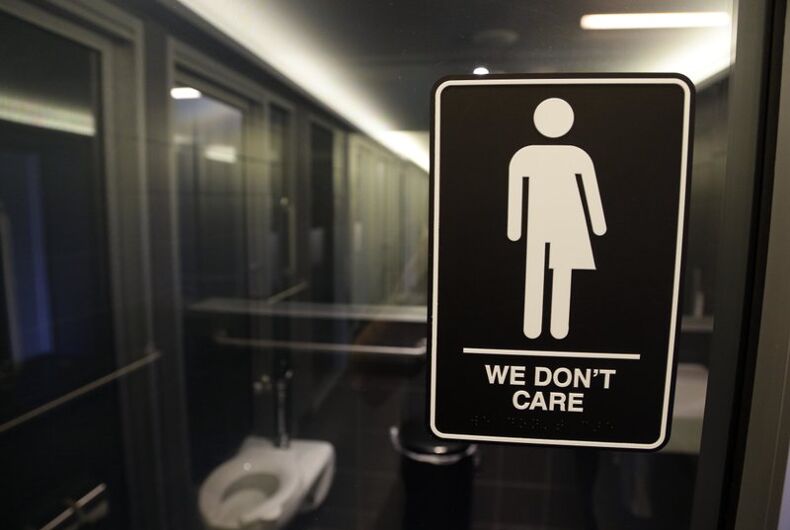 The governor of Vermont just signed a bill that would open up access to some public restrooms.

The bill requires all single-user public restroom to be labeled gender neutral. It applies to restaurants, schools, stores, and other public buildings and public accommodations.

H.333 passed the Vermont House with a strong majority and got unanimous support in the Vermont Senate. And on Friday, Governor Phil Scott (R) signed the bill.

“Two years ago, when I was running for governor, I was asked in a debate whether I would support gender neutral bathrooms in public places or not,” Scott said.

“I responded with a one word answer, a simple yes. Because to me it was just that simple … And now two years later I am honored to be able to sign that legislation into law today.”

“For men and women stuck in long bathroom lines, it provides access to any available single-user bathroom, and for caregivers and their charges, whether children or folks with disabilities needing assistance, it provides access to a bathroom that is not marked for one particular gender, thus alleviating the anxiety that’s caused by needing to choose a gendered bathroom.”

The bill is also a pointed statement about how state-level bathroom bills are usually about restricting access instead of increasing it.

“Too many states are passing ‘bathroom bills’ that move in the wrong direction, discriminating against LGBTQIA individuals and forcing schoolchildren to use the restroom that corresponds with their gender at birth, not their chosen gender identity,” said House Speaker Mitzi Johnson (D) in a statement.

“In a time where LBGTQIA rights are being rolled back on the federal level, when the Trump administration isn’t protecting children, it is our duty to step in.”

The bill only applies to bathrooms with one toilet, and it only requires a change in signs. It takes effect on July 1.

When he saw two gay teens walking the boardwalk holding hands, he knew they were targets