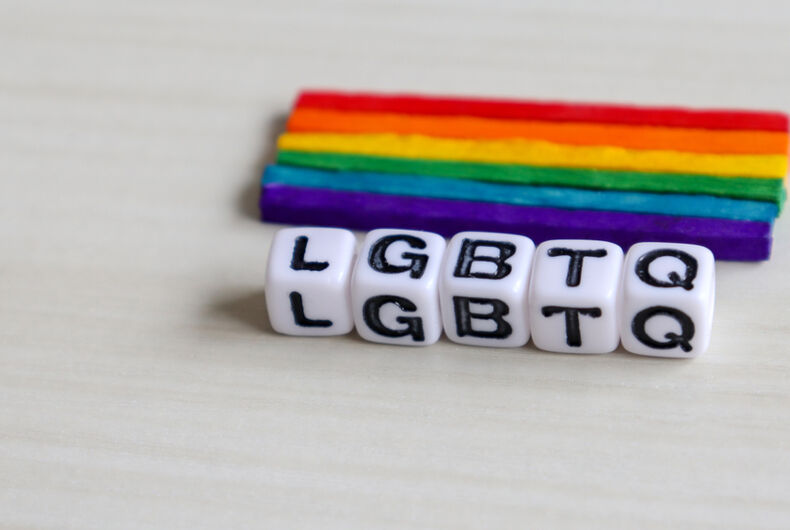 For the longest time, the right wing prefered to use words like “sodomite” or “pervert” to describe someone who was not heterosexual (or, in the right’s language, “normal”). “Homosexual” was often thrown about, in the same way that segregationists used to use the word “Negro.”

If the word “gay” had to be used, it was usually inside quote marks and coupled with a word like “agenda” to make it clear that there was something nefarious afoot.

But of late, the right wing has started using our own acronym to describe us. Consider a few examples:

Elizabeth Johnston, aka Activist Mommy and the force behind the dud ex-gay march on Washington this month, regularly rants about “far left, pro-LGBTQ education.”

Tony Perkins, head of the Family Research Council, has referred to “LGBTQ agitators” to describe activists.

A slightly confused Jerry Falwell Jr. said the omission of “LBGTQ issues” from a psychology textbook at his Liberty University was academically justified.

Often the right doesn’t go full in by acknowledging questioning individuals but still uses LGBT as shorthand. But the fact that they are using the same terminology is important.

It’s not as if any of the leading homophobes have changed their opinion. For example, Johnston used the Freedom March to urge LGBTQ people to “seek therapy for their unnatural and unwanted desires.” And Tony Perkins is second to none in his quest to stop equal rights for LGBTQ people.

Yet the fact that our most virulent opponents feel obliged to use our language–even as they continue their attacks–is a kind of victory. While there are still plenty of fire-breathing pastors willing to use vicious language, the broad and growing acceptance of LGBTQ people by the public is forcing the right wing to soften its description of the community. It’s a backhanded acknowledgment that the old rhetoric will only turn people off.

Even Mike Pence, the religious right’s man in the White House, has figured this out. Pence wants to appear reasonable, even though his record of opposing LGBTQ rights has made him the darling of conservative Christians.

But Pence is now using all the right words to mask his homophobic intent. When a high school student organized a Pride festival in Pence’s hometown, the vice president declared himself “heartened.” Of course, this is the same Mike Pence who engineered the ban on transgender military personnel just days prior to the event.

That is the point.

Ultimately, it’s the policy that counts, and the right wing is as homophobic as ever. But the fact that its leaders can’t rely upon their old descriptions is a sign of their eroding appeal.

They’re preaching to the choir now, but their using our description of ourselves to do it.