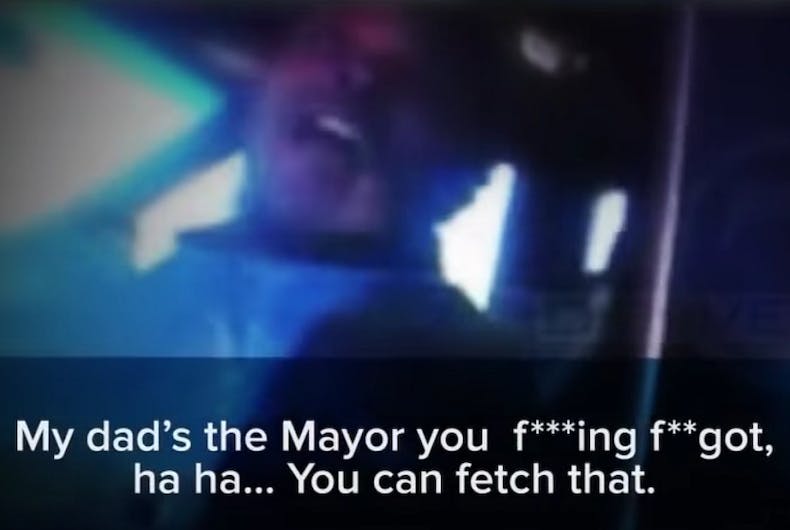 The son of the mayor of Denver was caught on video calling a police officer a “faggot” and a “bitch” during a traffic stop.

The video clip from the officer’s bodycam was sent anonymously to Denver7, a local ABC-affiliate.

In the clip, Jordan Hancock, the son of Denver Mayor Michael Hancock, can be heard taunting a police officer in Aurora, Colorado, while he was pulled over for driving at 65 MPH in a 40 MPH zone this past March.

“My dad’s the mayor, you fucking faggot,” Hancock said in the 20-second clip.

“Mayor of what?” the officer responded. “Of Denver? Well, you’re in Aurora.”

“Well, guess what,” he said later, “I’m about to get you fired, you fucking bitch.”

“For what?” the officer asked.

“Yeah, exactly, don’t worry about it,” Hancock said. “Hating in blue. Whatever, you fucking bitch.”

“Exactly, and I got my own, you fucking faggot.”

Jordan Hancock hasn’t commented on the video, but his father posted a statement on Twitter.

Jordan has “apologized to the officer,” the mayor wrote. “While we don’t support nor condone his inexcusable actions & words, we love our son dearly & will work w/him to turn a personal mistake into a valuable lesson for himself & the community.”

We've addressed our son's behavior at a traffic stop w/him. He's apologized to the officer. While we don't support nor condone his inexcusable actions & words, we love our son dearly & will work w/him to turn a personal mistake into a valuable lesson for himself & the community.

The mayor has not addressed this incident in the context of hate speech towards LGBTQ people.