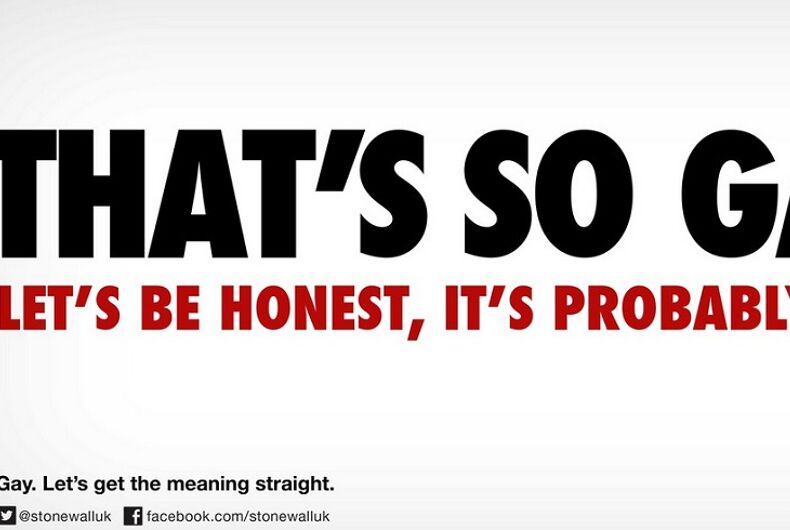 Rainbow Youth isn't the only LGBTQ organization to go after "That's so gay." In 2013, the UK organization Stonewall also ran a campaign against the expression.Photo: Stonewall

A person filed a complaint about a radio advertisement that told listeners not to use “gay” as a way to describe something bad.

At issue is an ad by Rainbow Youth, an organization in New Zealand that has run television and radio ads as part of its “If it’s not gay, it’s not gay” campaign.

In a radio ad, one man says that he went to a “pretty gay” wedding. Another man responds, “I don’t think you’re meant to say that anymore.”

The punchline is that the wedding was actually a wedding between two men.

Related: This PSA created by LGBT teens is going viral for all the right reasons

That might seem innocuous enough, but a listener identified as “J Wood” wasn’t having it.

“This advertisement attempts to pervert the use of language, in that it blatantly tries to classify the word ’gay’ as offensive unless used exclusively to refer to people of homosexual disposition,” they wrote in a complaint filed with the Advertising Standards Authority (ASA), an industry organization that monitors advertising in New Zealand.

“It implies that if a person used it, for example, to describe another or others as having had ‘a gay old time,’ that they are impugning and/or insulting the homosexual community as a whole.”

“As a normal, hetrosexual [sic], and quite tolerant of the differences of others, I find that to be offensive and in fact, probably against the code of human rights in that it attempts to portray myself (and others like me) as being homophobic if we use the word in normal, everyday English,” they concluded.

While we can question how “normal” this person is when they’re writing an official complaint based on a clear – and possibly intentional – misunderstanding of a radio ad (the ad is against gay-as-in-bad, not gay-as-in-happy), it’s not all that “tolerant” to throw a hissy fit after politely being told not to casually insult an entire class of people.

The ASA took the time to actually respond to J Wood, and ruled that there were “no grounds” for the complaint. The ASA said that “most consumers” would understand that the ad is “employed light-hearted humour to illustrate a shift in what is culturally appropriate with the aim of reframing everyday vernacular.”

“The advertisement made no comment on the use of the word ‘gay’ in terms of the traditional meaning of ‘light hearted and carefree’ or ‘brightly colored and showy'” and “was not in breach of the Code for People in Advertising or the Code of Ethics.”

This isn’t the first time one of Rainbow Youth’s ads had a complaint filed against it. Last year, a woman whose first name is “Gay” said she was “deeply insulted” because she thought the ad meant “unless I’m a lesbian, I’m not me.”

That complaint was also thrown out.