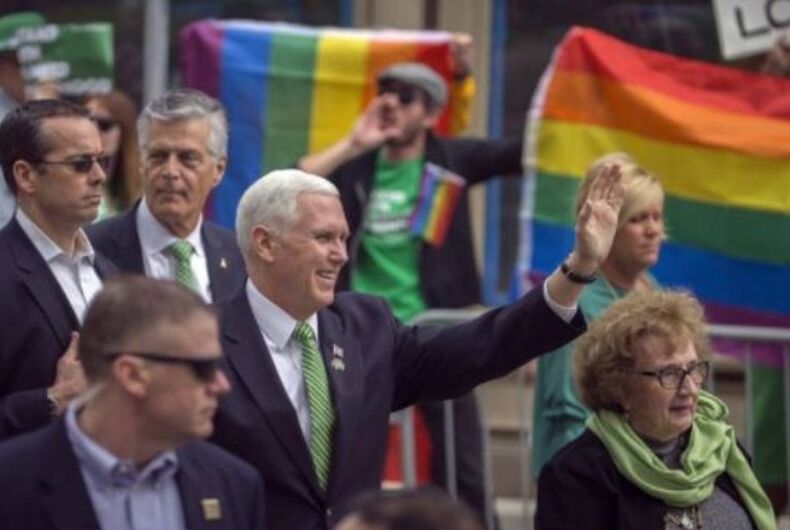 Of all the responses you’d expect from Mike Pence about a Pride festival in his home town, being “heartened” is not one of them. After all, Pence has a record of homophobia that the most hard-core anti-LGBT activist would envy. Yet there was the vice president commending “young people” for their involvement in politics.

So, what gives? As it turns out, Pence is playing some shrewd politics and pointing the way toward how the GOP might handle LGBT issues in the future.

In the age of Trump, everyone has come to expect that opposite sides are locked in a battle to the death with rhetoric to match. After all, the president thinks little of bullying his opponents and demeaning them with nasty nicknames.

As it turns out, this is the one characteristic that gives Trump’s core base pause. Not enough to abandon him, but enough to roll their eyes with each tweet.

Pence is never going to be another Trump. His political persona is based on being Mr. Nice Guy. He’s also ambitious and took the vice president slot because he wants to be at the top of the ticket someday.

So Pence is employing a different tact. He’s going to kill his enemies with blandness. Thus, we get a wishy-washy compliment for the high school student organizing the pride event.

The leadership of the Republican party knows that it has lost the culture war on gay issues. It will still fight for exceptions based on “religious liberty,” but it also knows that many voters–and the vast majority of young voters–are not going to like a party that is loudly anti-LGBT.

But what happens if you soften the rhetoric and change nothing else? That’s the tactic that Pence is taking. He’s still doing his best to prevent LGBT progress. After all, he had a big hand in the reprehensible policy banning transgender service members.

But for voters who aren’t paying close attention (which is most of them), Pence appears to be much more conciliatory. What happens at a policy level escapes most people.

For religious right leaders and other assorted anti-gay types, the policy is all that matters. Pence could lavish praise on Adam Rippon, but as long as Pence is going to keep rolling back LGBT gains, that’s all that matters.

In its own way, it’s a clever political tactic. The Republican party can’t afford to keep shedding culturally moderate voters, like suburban women, who are turned off by the President’s coarseness and history of sexual predation. Mr. Nice Guy would be quite the contrast with the Avenging Cheeto.

Yet conservative evangelicals, the core of Trump’s base, know that they can count on Pence, even more so than they count on Trump. Pence is one of their own, which Trump will never be.

Whether Pence ever gets the chance to test this theory in a presidential campaign is an open question. But Trump owns the Republican party now, and Pence is his logical heir. So get ready to hear more nice words about us.