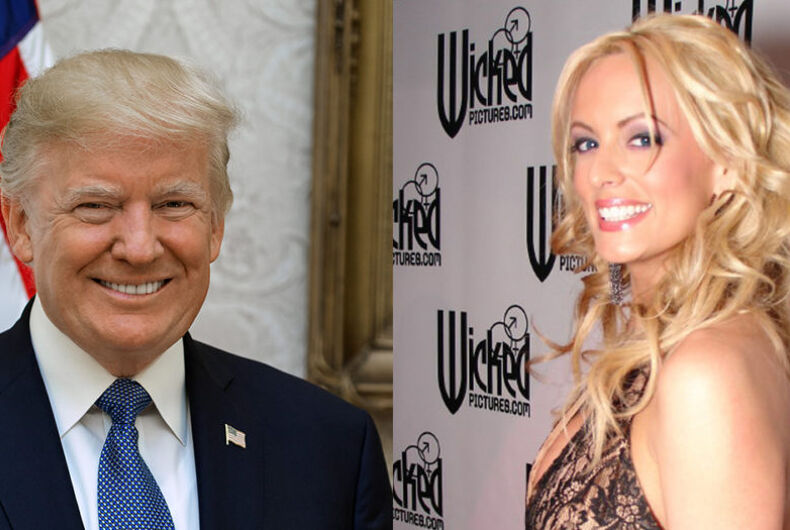 Stormy Daniels’ close gay friend Keith Munyan has said in a new interview he not only knew about her alleged affair with Donald Trump, he listened in on some of their calls.

The 56-year-old told The Washington Post in an interview this week he listened in on six or seven calls between Daniels and Trump, where he tried to keep her interest by promising her a condo in Florida.

She wasn’t interested in that, instead hoping to parlay her relationship into a role on The Apprentice.

“The only thing I ever heard him do is just babble like he always does,” Munyan said. “The conversation I remember the most is about the condominium…I heard her say, ‘I don’t want that. That’s not what I want.'”

Related: A gay politician trolled Republicans so hard they abandoned plans to name a highway

Munyan is the only one listed in the nondisclosure agreement, aside from Daniels, to have spoken out about the affair. The others, Daniels’s manager Gina Rodriguez, her ex-husband Mike Mosney, and adult film actress Jessica Drake, have so far all remained silent.

Munyan revealed that while he doesn’t know any of the more pertinent details to the case, like if Trump knew of his lawyer, Michael Cohen, making a payment of $130,000 in hush money to Daniels, or, as she claims in a her lawsuit, if he was ever reimbursed.

He did however have some sad details to offer up, in addition to the mumbling phone calls and endless promises of a condo that was wholly unwanted.

Munyan said he never heard Trump speak of his wife or kids (unsurprisingly), and that he once greeted Daniels in his pajamas and was instructed to put on a suit, to which he obliged.

“He was not dressed appropriately to have dinner with a young lady,” Munyan said.

Additionally, he said Daniels told him she once spanked Trump, upon his request, with a copy of Forbes magazine, a claim that has been previously reported.

Munyan’s fiance, 57-year-old J.D. Barrale, also spoke with The Post and confirmed he too had heard about the relationship. The pair claim Daniels calls them “my dads.”

“She’s a very strong, very intelligent woman,” Barrale said. “With a damn good sense of humor. That has served her well because it has been a rough road.”

A trans teen left the most heartbreaking suicide note. Her name was Hope.