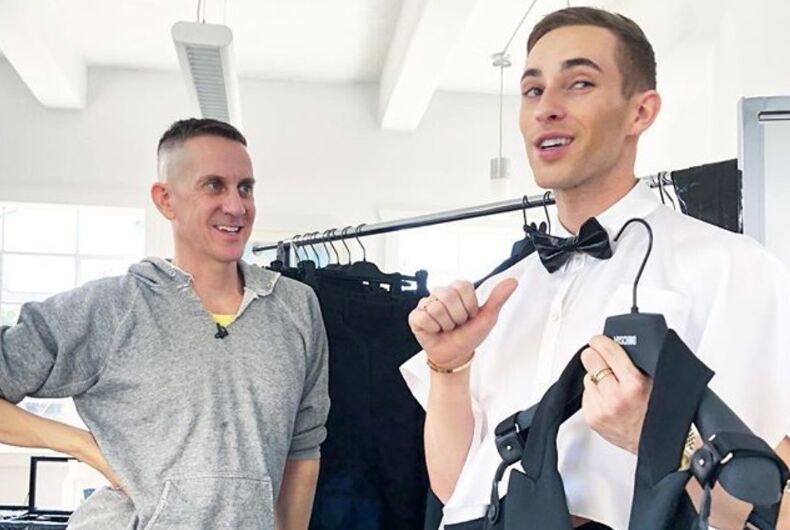 Adam Rippon with Jeremy Scott, the designer behind his Oscars lookPhoto: Instagram/Rippon

Adam Rippon broke the mold and then some on the red carpet at the Oscars by sporting a BDSM-style leather harness. Turns out, the daring trendsetter, who recently spoke of the importance of taking risks while receiving is HRC Visibility Award, nearly took it a step even further.

Rippon told Sean Evans, host of the web series Hot Ones, on an episode released today, that in addition to the hot leather look he offered up, he nearly went shirtless as well.

“When we were first doing it, Jeremy (Scott) was like, ‘Don’t wear a shirt.’ And I was like, ‘You’re right, I shouldn’t do that.’ And then the whole team around me was like (laughs), ‘Adam, you’re gonna wear a shirt!'” he recalled.

“So it could have been even more?” Evans said. “You could have just pushed it even more almost, if it were up to you.”

“If it were up to me, I’d always push it more,” Rippon confirmed.

Rippon also shared how much he enjoyed the look Scott created for him.

“It felt like you were kinda strapped into the tuxedo. I just felt really fucking cool.”

Watch Rippon share the story below. The video is cued up to start at the relevant point, but really the whole episode is worth your time, if you want to back up the play button and watch it from the start.

Schonberger asked Rippon how he managed to get his famously well-defined abs. His advice for those wishing for a similar look is that abs recover quickly, so workout the core every day.

Naturally, individual results may very, and being in your twenties will also help.

If you’re disappointed Rippon didn’t go shirtless for the Oscars, you thirsty bitches can quench yourselves with a visit to his Instagram.

So fun shooting with @rollingstone today. Love you, @almostrad and the whole team 👨🏻‍🎤😍🤘🏻

So exhausting being me

Let me think about it 🤔

Thank you @attitudemag for a great interview. Living my best life in a locker room shower.

Stormy Daniels’ gay ‘daddy’ listened in on her calls with Trump. The details are sad.