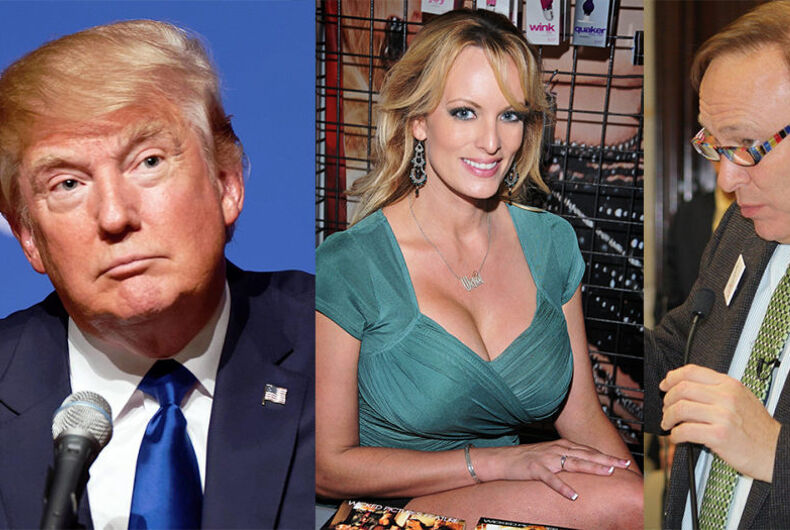 Plans for a highway named after President Trump inspired Sen. Dabakis to come up with a road naming idea of his ownPhoto: Trump by Michael Vadon (CC license 2.0), Daniels by Glenn Francis, Dabakis by Kirstenfrankly (CC licenses 4.0)

Openly gay Sen. Jim Dabakis warned Republicans who were looking to reward President Donald Trump for giving the go ahead to destroy public lands, for the sake of short-sighted corporate greed by naming a highway after him, that to do so would mean he would bring a road naming amendment of his own.

Utah Republican Rep. Mike Noel put forward the plan to name the “Donald J. Trump Utah National Parks Highway” in his honor, after he agreed to cut into the Bears Ears and Grand Staircase-Escalante national monuments back in December, shrinking their size and opening them up for oil, gas, and coal mining.

The proposal passed out of the House Natural Resources, Agriculture and Environment Standing Committee, but has since been abandoned by Noel after a backlash. Noel claimed he had the votes, but said he was pulling it due to personal attacks he received for putting it forward.

“If you say nice things about the president, you are somehow a despicable person,” he said, according to The Salt Lake Tribune.

Noel reports being yelled at by constituents, some of whom got hold of his home number. He pulled the legislation on Wednesday, less than a week after it was introduced.

Dabakis had warned that he would introduce an amendment to the bill that would propose naming the frontage road that runs along the would-be Donald J. Trump Utah National Parks Highway to the “Stormy Daniels rampway,” in honor of the former adult film star who was reportedly paid $130,000 by Trump’s lawyer to not speak of her affair with the president.

The Democratic senator told CNN the name won out over other possibilities, like “Comb-over Crescent,” “Indictment Intersection,” and “Russian Inclusion Cloverleaf.”

Dabakis’ proposed amendment would never had a chance, but it did help draw attention to the ridiculous plan to name a highway after Trump for offering up a land grab of public lands to corporate interests that, like the president himself, don’t have the public’s concerns at heart.

Thankfully, neither will happen now.