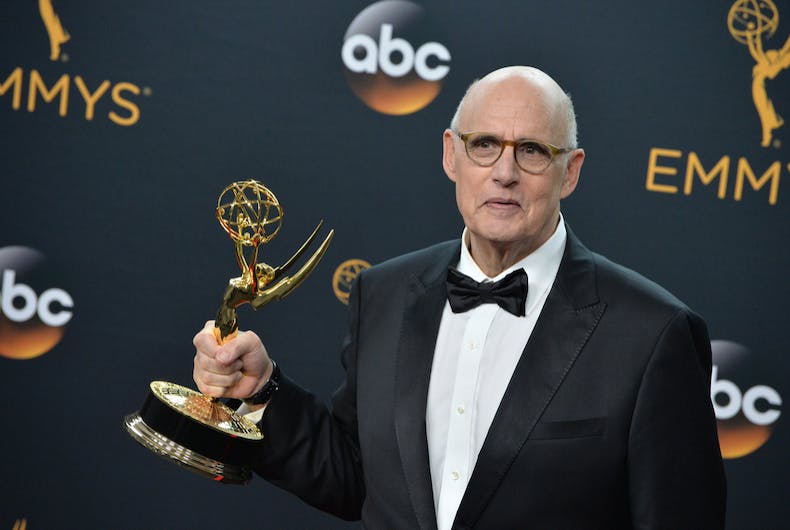 Jeffrey Tambor has been fired from Transparent amid allegations of sexual assault by several women.

Tambor appeared to announce his resignation from the show back in November, as initially reported by Deadline.

“Playing Maura Pfefferman on Transparent has been one of the greatest privileges and creative experiences of my life,” he said. “What has become clear over the past weeks, however, is that this is no longer the job I signed up for four years ago.”

“I’ve already made clear my deep regret if any action of mine was ever misinterpreted by anyone as being aggressive, but the idea that I would deliberately harass anyone is simply and utterly untrue,” he added. “Given the politicized atmosphere that seems to have afflicted our set, I don’t see how I can return to Transparent.”

A spokesperson for the actor then clarified that Tambor had not resigned, but simply stated that he didn’t know how he could return.

That made the firing inevitable if Amazon wished to part ways with him.

They finally took that step on Thursday, noting that it had completed its internal investigation of Tambor.

He has been accused of misconduct by his former assistant, Van Barnes, and by actress Trace Lysette, who appeared on the show. Both women are transgender. Makeup artist Tamara Delbridge has also said he made unwanted sexual advances on her, claiming he grabbed her and forcibly kissed her on the lips.

“I have great respect and admiration for Van Barnes and Trace Lysette, whose courage in speaking out about their experience on Transparent is an example of the leadership this moment in our culture requires,” said Transparent creator Jill Soloway in a statement.

“We are grateful to the many trans people who have supported our vision for Transparent since its inception and remain heartbroken about the pain and mistrust their experience has generated in our community,” they continued.

“We are taking definitive action to ensure our workplace respects the safety and dignity of every individual, and are taking steps to heal as a family.”

“I am profoundly disappointed in Amazon’s handling of these false accusations against me,” Tambor said in a statement of his own on Thursday night. “I am even more disappointed in Jill Soloway’s unfair characterization of me as someone who would ever cause harm to any of my fellow cast mates.”

“In our four-year history of working together on this incredible show, these accusations have NEVER been revealed or discussed directly with me or anyone at Amazon,” he continued. “Therefore, I can only surmise that the investigation against me was deeply flawed and biased toward the toxic politicized atmosphere that afflicted our set.”

“As I have consistently stated, I deeply regret if any action of mine was ever misinterpreted by anyone and I will continue to vehemently defend myself. I also deeply regret that this groundbreaking show, which changed so many lives, is now in jeopardy. That, to me, is the biggest heartbreak.”

Lysette tweeted out her hope that this would bring closure to “the hardest thing I’ve ever had to go through” and asked for fans to continue to support the show going forward.

Finally some closure I hope. This was one of the hardest things I’ve ever had to go through. Please show your support for @transparent_tv so we can make season 5 something great. Thank you all for your love and endless support ❤️ https://t.co/g0sbXJ70xt

The show is now facing the same predicament that Netflix’s House of Cards is up against following the firing of Kevin Spacey amid his own sexual assault allegations, as it tries to carry on the series without its star.

House of Cards has tried to pick up the slack and move on by casting Diane Lane and Greg Kinnear to take over as co-stars, as well as putting Robin Wright, who plays Claire Underwood, in a more central role.

Will Transparent make a similar move, in an effort to bring in viewers with the addition of new, big names? Or will it choose to simply focus more on the show’s other characters?

Stay tuned to find out.

While America cries out for stricter gun laws, politicians keep doing the opposite