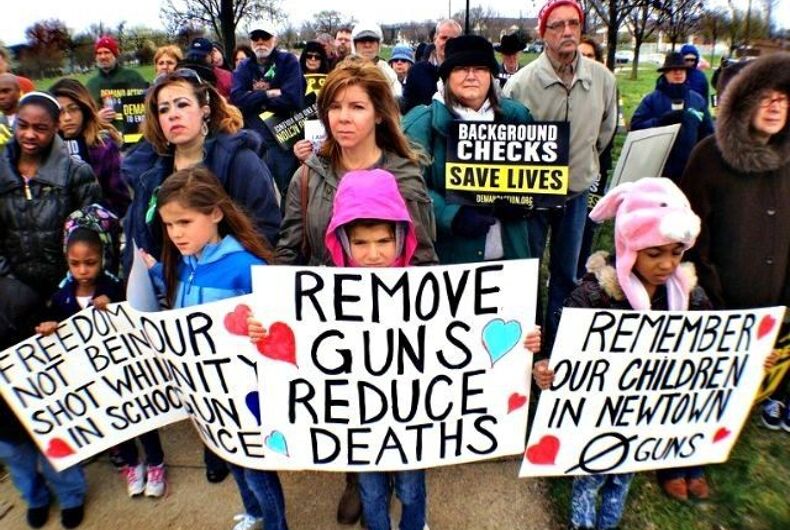 As I sit here sad and enraged while writing yet another editorial on the scourge of gun violence hours after the horrific slaughter of 17 people at Marjory Stoneman Douglas High School in Parkland, Florida, I think “It does not have to be this way!”

The shooter, a young man of 19, legally purchased an AR15 semi-automatic rifle that another eight million residents of the U.S. also own, even though he is not yet old enough to legally buy a can of beer. These types of rifles are made and used to assault people and not to assault Bambi.

According to the U.S. Centers for Disease Control and Prevention, gun-related deaths have reached epidemic proportions in our country by snuffing out the lives of well over 30,000 people (with 1/3 homicides and the remainder suicides and accidents) and wounding many more annually.

Everytown found that on average, 96 people are killed by guns every day. For every person killed, two more are injured. Seven children and teens are killed on average daily. Many of the guns used in these killings reach military-level weapons power and remain legal to purchase.

Today in the United States, there are approximately 101 firearms per 100 people. Our country ranks high when compared with 22 other wealthy industrialized nations in per capita gun-related deaths with 3.85 per 100,000 residents. Compare that, for example, with the United Kingdom at 0.07, Japan at 0.04, Germany at 0.12, Indonesia at 0.10, and Oman at 0.06.

A study by The American Journal of Medicine found that though the U.S. has half the population of the other 22 nations combined, it accounted for 82% of all gun deaths and 90% of all women killed by firearms. Also, 91% of youth under 14 who died by gun violence and 92% of young people between ages 15 and 24 killed by guns were in the United States.

Long-time gun safety advocates and those newly on board have been pleading for lawmakers across the country to pass common-sense regulations on the manufacture, purchase, and ownership of firearms. In numerous instances, local, state, and national legislators have heeded the call by, paradoxically and callously, making it easier for people to get their hands on these dangerous weapons.

Since the Sandy Hook Elementary School massacre on in 2012, approximately 24 states have extended people’s right to carry guns into public spaces such as bars, houses of worship, college campuses, and some businesses, and even into airports up to the TSA checkpoints.

Related: 9 of the top 10 recipients of gun lobby money are anti-LGBT

Some states, like Speaker of the House Paul Ryan’s Wisconsin, eliminated the 48-hour waiting period to buy a handgun. In Texas, students who are at least 21 may now carry guns anywhere on a university campus except for sports stadiums. And in Ohio, people have the right to carry firearms into daycare centers.

Congress, however, overturned the policy, mostly on party lines. President Trump signed the measure into law one month after taking office. Following every mass shooting, he refers to them as a “mental health problem” as he did again after 17 students and their teachers were killed this week.

After the horrific mass slaughter of country music outside of the Mandalay Bay Hotel in Las Vegas, gun rights advocates and many Congress members believed they could pass a basic regulation making it illegal to sell or possess the bump stock used by the shooter to increase the speed of his semi-automatic rifles.

A vote has still to be called in the Congress. For this reason, approximately 15 states have begun considering bump stock restrictions of their own; New Jersey and Massachusetts enacted such laws. Prior to the Las Vegas shooting, New York and California had already imposed these restrictions.

At this point, Speaker Ryan refuses even to call for the creation and convening of a Select Committee on Gun Violence suggested by Democratic House Minority Leader Nancy Pelosi to “study and report back common sense legislation” to halt injuries and murders in this epidemic of mass shootings.

Recently Trump has proposed cutting millions of dollars, amounting to 16% of the yearly budget, from the National Criminal Records History Improvement Program and the NICS Act Record Improvement Program, which give states federal grants to improve reporting to the national background-check database.

While an estimated 90% of those polled want stepped-up background checks for all gun purchases and stricter gun laws (including mandatory waiting periods for all gun purchases, bans on assault weapons, stricter regulations on ammunition sales, and a ban on high-capacity magazines holding more than 10 rounds), legislators are loosening regulations by making it easier for private citizens to accumulate massive arsenals.

The shooting in Marjory Stoneman Douglas High School is the 18th school shooting so far this year, at least the 273rd school shooting overall, and the 1,607th mass shooting since the Sandy Hook school massacre.

Comprehensive commonsense regulations for firearms safety is not simply a political issue. It is a moral imperative!

Jeffrey Tambor has been fired from ‘Transparent’ amid sexual misconduct allegations