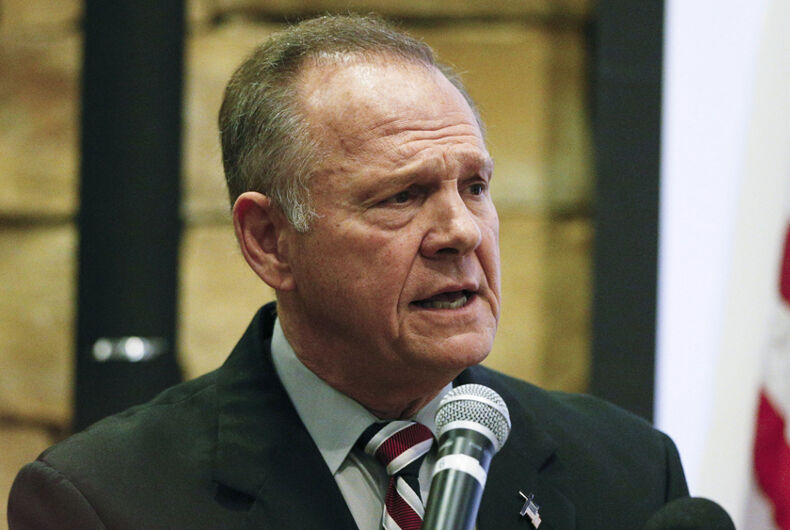 President Donald Trump is no longer tiptoeing around his support for Roy Moore, and has now offered a full endorsement of the candidate that has been accused of sexually assaulting teenagers.

The president tweeted out his support this morning, arguing that the Republicans need Moore to win.

Democrats refusal to give even one vote for massive Tax Cuts is why we need Republican Roy Moore to win in Alabama. We need his vote on stopping crime, illegal immigration, Border Wall, Military, Pro Life, V.A., Judges 2nd Amendment and more. No to Jones, a Pelosi/Schumer Puppet!

Moore shared the tweet, saying he was “thankful for President Trump’s support. The America First agenda will #MAGA. Can’t wait to help him #DrainTheSwamp.”

It has since been confirmed that Trump also called Moore to offer his endorsement of the disgraced candidate.

“The President had a positive call with Judge Roy Moore during which they discussed the state of the Alabama Senate race and the President endorsed Judge Moore’s campaign,” principal deputy press secretary Raj Shah said in a statement.

Moore, who is running against Democrat Doug Jones in a special election that will see Alabamans head to the polls on Dec. 12 to pick their newest senator, has denied the allegations against him. He claims they are politically motivated, and has blamed everyone but himself, including the LGBTQ community.

A new CBS News poll shows that 71 percent of Republicans in Alabama think Moore is innocent of the allegations against him, and blame the Democrats and the media for what they believe to be false attacks.

Another, previous poll found that 40 percent of Evangelicals were more, not less, likely to vote for him in light of the allegations.

Senate Majority Leader Mitch McConnell had been calling on Moore to drop out of the race, saying he believed the women who accused him of misconduct. Now that it is clear Moore won’t be stepping aside, McConnell is softening his tone.

McConnell, appearing on ABC’s This Week was asked again about Moore, and whether he would refer his case to the Senate Ethics Committee should be win.

Related: Log Cabin Republicans release brilliant Roy Moore ad that you have to see to believe

“I think we’re going to let the people of Alabama decide a week from Tuesday who they want to send to the Senate, and then we’ll address the matter appropriately,” McConnell said.

“Do you believe that Judge Moore should be in the Senate?” host George Stephanopoulos asked bluntly.

“I’m going to let the people of Alabama make the call. This election has been going on a long time, there’s been a lot of discussion about it. They’re going to make the decision a week from Tuesday,” he said.

McConnell also demurred when asked if he would make a recommendation to the Senate Ethics Committee to investigate Moore.

He also dodged a question about the allegations of sexual assault that have been made against President Trump.

Watch the dance play out below.