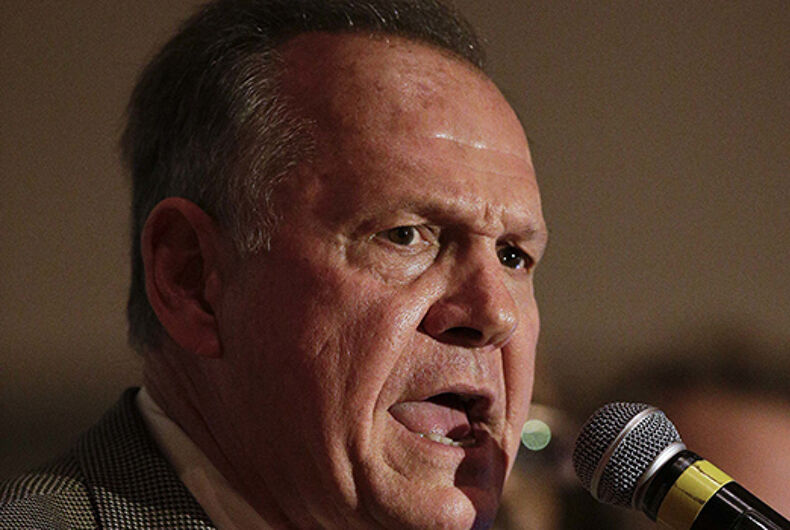 Moore, who has been accused of initiating sexual conduct with a 14 year-old and sexually assaulting a 15 year-old, was reportedly banned from the Gadsden Mall in the 1980s for his pursuit of young women there.

Gena Richardson said Moore relentlessly pursed her for a date, even though she said no, including calling her up at school when he was unable to get her phone number. When she finally relented, she said, the date ended with a forceful kiss that left her feeling “scared.” She was 18 at the time, and he in his early thirties.

“All these years, I thought that was an isolated incident,” Richardson says. “Now, as a mother and a grandmother, it just makes me physically sick. I realize that it didn’t just happen to me.”

Tina Johnson told AL.com that in 1991 she went to Moore’s law office to take care of a legal matter, accompanied by her mother. She said that Moore was acting flirtatious with her throughout the meeting, and that when she left, Moore grabbed her behind.

She said her mother, who had got up to leave before her, was already out of the room at the time.

“I’m not perfect,” she said. “I have things in my background and I know (the public) will jump on anything, but (what happened with Moore) is still the truth, and the truth will stand when the world won’t.”

Moore has denied all the sexual misconduct allegations against him, calling them politically motivated.

“This is not a politics thing with me,” Johnson said, describing herself as apolitical. “It’s more of a moral and religious thing.”

The woman accusing Moore of sexually assaulting her when she was 15, Beverly Nelson, said that both she and her husband voted for Donald Trump.

Johnson added that she was bothered by Moore’s tendency to speak about his Christian faith. He has sold himself throughout his political career as your typical “family values” conservative, and made headlines for refusing to remove a monument honoring The Ten Commandments from in front of his courthouse.

While most Republicans are falling all over themselves to denounce Moore and urge him to drop out of the race, especially as shows begin to show support picking up for Moore’s opponent, Democrat Doug Jones, President Donald Trump has dodged questions on the matter.

Trump might be slow to answer due to his own history of bragging about sexual assaulting women.

A recent poll showed that a shocking 40 percent said they were more, not less, likely to vote for the disgraced candidate now that he has been accused of sexual assault.