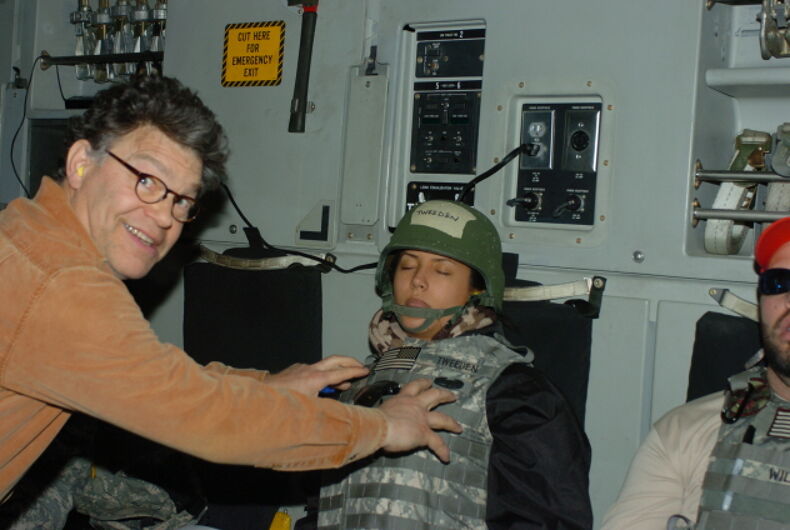 Updated with Franken’s full apology and statement at the end of the post.

Liberal senator Al Franken has been accused of sexual assault by Leeann Tweeden, a morning news anchor on TalkRadio 790 KABC in Los Angeles. In a lengthy post on the station’s website, Tweeden alleges that Franken forcibly kissed her against her will during a USO tour to Afghanistan in 2006 and then groped her breasts while she slept on the flight back to the United States.

Tweeden says that Franken, who was a comedian on “Saturday Night Live” before joining the Senate in 2008, wrote a skit for performance during the tour with other celebrities. While she had planned to emcee the show, she says Franken deliberately wrote her into the skit so he could kiss her.

“I suspected what he was after, but I figured I could turn my head at the last minute, or put my hand over his mouth, to get more laughs from the crowd,” Tweeden wrote. “On the day of the show Franken and I were alone backstage going over our lines one last time. He said to me, ‘We need to rehearse the kiss.’ I laughed and ignored him. Then he said it again… He continued to insist, and I was beginning to get uncomfortable.”

“He repeated that actors really need to rehearse everything and that we must practice the kiss. I said ‘OK’ so he would stop badgering me. We did the line leading up to the kiss and then he came at me, put his hand on the back of my head, mashed his lips against mine and aggressively stuck his tongue in my mouth.”

Tweeden also said Franken groped her as she slept on the flight back from the tour and provided photographic evidence.

“When our C-17 cargo plane took off from Afghanistan I immediately fell asleep, even though I was still wearing my flak vest and Kevlar helmet. It wasn’t until I was back in the US and looking through the CD of photos we were given by the [USO] photographer that I saw this,” Tweeden wrote. “I couldn’t believe it. He groped me, without my consent, while I was asleep. I felt violated all over again. Embarrassed. Belittled. Humiliated.”

“How dare anyone grab my breasts like this and think it’s funny?”

Franken has issued a statement about the allegation, saying he doesn’t remember the forced kiss, but apologizing for his behavior in the photo.

“I certainly don’t remember the rehearsal for the skit in the same way, but I send my sincerest apologies to Leeann,” Franken told CNN. “As to the photo, it was clearly intended to be funny but wasn’t. I shouldn’t have done it.”

Democratic Congresswoman Jackie Speier of California has previously stated that Congress is a “breeding ground for a hostile work environment,” and told her own story of sexual assault while serving as a young congressional staffer.

“A chief of staff held my face, kissed me, stuck his tongue in my mouth,” the California Democrat said in a YouTube video with the hashtag “#MeTooCongress.” “I know what it’s like to keep these things hidden deep inside.”

Speier has said that a Democrat and a Republican who are currently serving are both known to be serial sexual harassers, but refused to name any specific legislators.

“The first thing I want to do is apologize: to Leeann, to everyone else who was part of that tour, to everyone who has worked for me, to everyone I represent, and to everyone who counts on me to be an ally and supporter and champion of women. There’s more I want to say, but the first and most important thing—and if it’s the only thing you care to hear, that’s fine—is: I’m sorry.

“I respect women. I don’t respect men who don’t. And the fact that my own actions have given people a good reason to doubt that makes me feel ashamed.

“But I want to say something else, too. Over the last few months, all of us—including and especially men who respect women—have been forced to take a good, hard look at our own actions and think (perhaps, shamefully, for the first time) about how those actions have affected women.

“For instance, that picture. I don’t know what was in my head when I took that picture, and it doesn’t matter. There’s no excuse. I look at it now and I feel disgusted with myself. It isn’t funny. It’s completely inappropriate. It’s obvious how Leeann would feel violated by that picture. And, what’s more, I can see how millions of other women would feel violated by it—women who have had similar experiences in their own lives, women who fear having those experiences, women who look up to me, women who have counted on me.

“Coming from the world of comedy, I’ve told and written a lot of jokes that I once thought were funny but later came to realize were just plain offensive. But the intentions behind my actions aren’t the point at all. It’s the impact these jokes had on others that matters. And I’m sorry it’s taken me so long to come to terms with that.

“While I don’t remember the rehearsal for the skit as Leeann does, I understand why we need to listen to and believe women’s experiences.

“I am asking that an ethics investigation be undertaken, and I will gladly cooperate.

Even more women are coming forward with accusations against Roy Moore